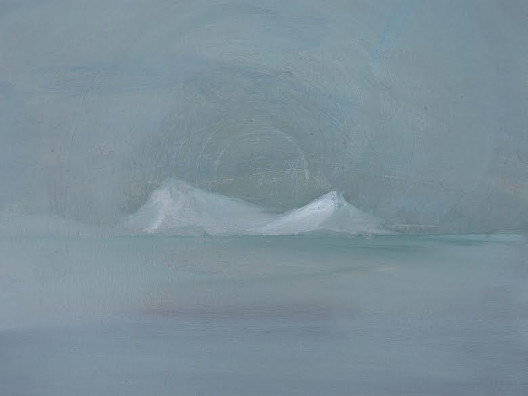 On 28th February, Galway Arts Centre will open ‘Magnetic North’, a solo exhibition by Galway based visual artist Selma Makela. Through painting and video, Makela uses geological and meteorological phenomena as a visual language to evoke the complexities of migration, memory and our changing environment.

The title, ‘Magnetic North’ refers to the Magnetic North Pole, the point on the surface of the Earth at which the planet’s magnetic field points down. The Magnetic North moves over time, due to magnetic changes in the Earth’s core. This group of paintings and video draw from a continued engagement with the arctic, a fascination with the element hydrogen and the scientific studies around magnetic and radioactive frequencies. The exhibition ‘Magnetic North’ suggests an alternative or non-linear narrative of both internalised, personal memory and externalised geographical memory. Makela’s work shows the fragility of nature and how things that seem so permanent; ice, snow, water, weather, animals, are vulnerable to change. The title of the exhibition also refers to this vulnerability; even vast, seemingly unmoving and unchanging landscapes are constantly shifting and attempting to stabilise themselves.

Selma Makela is a recipient of a 2012 Arts council Artist’s Bursary. She has also received awards from Galway County Council, the Arts Council, the Fleck Fellowship and was a prize winner in the 2007 Claremorris Open. Makela is a graduate of GMIT and is currently pursuing a Masters Degree in DIT. Makela has exhibited as a solo artist in PEER London, Oonagh Young Gallery Dublin and Ballina Arts Centre. Makela has exhibited in group shows in Galway, Dublin, Carlow, London and Banff, Canada.