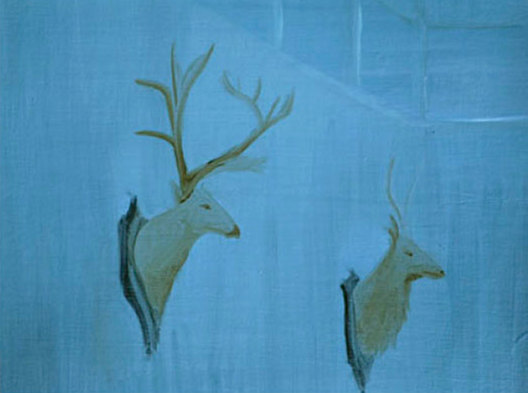 In a society stifled by a mood of over-whelming frustration and anger, Selma Makela’s exhibition ‘Eavesdropper’ offers an antidote to this disquiet and a space for contemplation. These new paintings were made during her recent residency in Banff and are exhibited in the Oonagh Young Gallery for the first time.

The eavesdropper Makela refers to is the half heard truth. Not a deliberate misrepresentation but an impression of a dissonant memory where each painting could be compared to a whisper that creates an intimate narrative among these works. Narrative and sub-narrative are inferred through combining the rhetoric of fairytale with the surrealism of dreams.

Deceptively effortless in appearance, Makela’s paintings take shape through decisive omission with paint applied in layers and systematically erased, leaving traces of previous layers behind. Although small in scale, these works often contain vast desolate spaces. Penguins, bears, birds, icebergs, seahorses and people appear, but are usually displaced and often alone. This deliberate dislocation intimates a deferral of self and represents the psychic comfort and turmoil of the natural world.

As the paintings often reference weather and geological phenomena, ‘atmosphere’ becomes a dominant characteristic of each work. The intimacy of the paintings combined with the broad open spaces depicted illustrates a self-contained but unnerving place; a distilled fragment of time articulated through atmosphere. Rather than landscapes, some of the paintings could be described as ‘climate-scapes’, with clouds and water recurring as motifs in these lonely spaces. Yet there is the eternal solace of colour – almost all the works are a meditation on white as reflected colour or simply as presence and absence evoking a sense of light.

In the constant bombardment of visual and aural clutter that occupies daily life, one expects one has to shout to be heard or get attention. Makela has little time for such posturing and does the exact opposite. In these challenging yet intensely pleasurable pieces, Makela’s approach to her work is best described by Wallace Stevens:

‘For the listener who listens in the snow

And, nothing himself, beholds