Sean Lynch: For the Birds 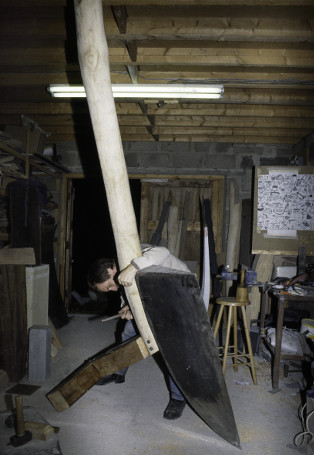 VISUAL present a major exhibition by Sean Lynch, Ireland’s representative at the 2015 Venice Biennale. Over the last decade, Lynch’s installations, sculptures and publications have explored the subjective layers of Irish history and offered alternative readings of the influences that shape our society today.

The exhibition includes a new work commissioned by VISUAL and the Local Authority Arts Office; For the Birds is based upon the medieval Irish myth of An Buile Suibhne, or the Frenzy of Sweeney. Cursed to be half-man, half-bird, Sweeney hopped throughout Ireland lamenting his woes in lyrical verse, until he reached a farmhouse in St. Mullins in Co. Carlow where he found a strange form of kindness – each evening he was invited to drink milk out of a bowl of cowdung. In collaboration with sculptor Tom Fitzgerald, Lynch reimagines this scene in the context of Carlow’s contemporary agricultural industry.

An accompanying catalogue designed by Wayne Daly will feature an in-depth essay on Lynch by critic and lecturer Caoimhin Mac Giolla Leith.

An Buile Suibhne and the St. Mullins connection

Walking tour of St Mullins with storyteller Aideen McBride, in partnership with Feile an Fomhair and the Carlow Walking Festival. For more information on the festivals, contact Carlow Tourism on 059 – 9130411. Places are limited, advance booking recommended

Women and the Modern Movement in Rural Ireland

Kindly supported by the ICA