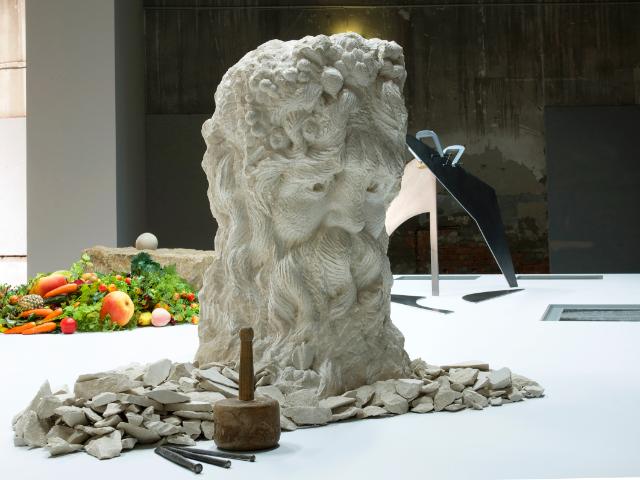 Limerick City Gallery of Art, in partnership with Ireland at Venice, is pleased to present The Irish Tour of Adventure: Capital, a new artwork by artist Sean Lynch that was commissioned for Ireland at Venice 2015, the Irish Pavilion at the 56th International Art Exhibition – La Biennale di Venezia. Visited by over 400,000 people during the world’s most prestigious visual arts exhibition,Adventure: Capital now begins its national tour of Ireland.

Adventure: Capital is Sean Lynch’s most ambitious project to date and traces a journey from myth to minimalism around Ireland and Britain, combining Greek river gods; public art at regional airports; quarries and the art of stone-carving; an abandoned sculpture in Cork; and a traffic roundabout, on a on a storytelling journey that unravels notions of value and the flow of capital through an anthropological lens.

Alongside Adventure: Capital at Limerick City Gallery of Art, Sean Lynch will present a selection of previous artworks, including A Church Without A Steeple (2012, Arts Council Collection), A Rocky Road (2011), Peregrine Falcons Visit Moyross (2008), Bill Clinton (2007), and Latoon (2006–2015). Subsequent presentations of Adventure: Capital in Sligo, Dublin and Belfast will also be individually configured with existing and new artworks, giving audiences multifaceted perspectives on Lynch’s practice.

The exhibition is accompanied by the Adventure: Capital exhibition publication, freely available with an essay by the curator Woodrow Kernohan and additional texts by Sean Lynch and Michele Horrigan.