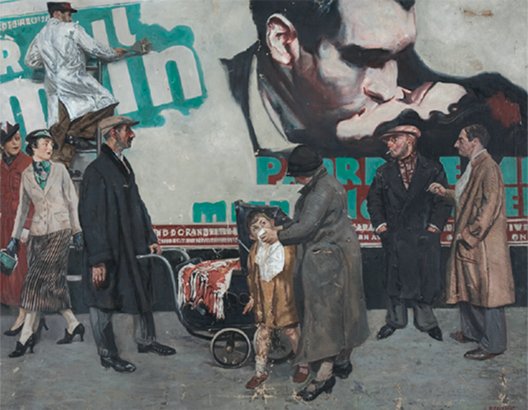 Opening Reception Thursday 12 July at 7:30pm • Opening by Mr Jimmy Deenihan TD, Minister for the Arts, Heritage and the Gaeltacht

This summer, Crawford Art Gallery will present a major exhibition of the work of Irish artist Seán Keating (1889-1977) opening to the public on Friday 13 July 2012.

Entitled ‘Seán Keating: Contemporary Contexts’, curated by Dr Éimear O’Connor HRHA, in collaboration with Crawford Art Gallery, the exhibition aims to encourage a re-evaluation of the artist’s contribution to Irish life as an artist, and as a cultural commentator in the difficult post-Treaty years as Ireland sought a new national and international identity.

To commemorate Keating’s achievements, and to acknowledge the post-colonial circumstances in which he worked, the paintings on exhibition in Seán Keating: Contemporary Contexts are mainly those of the artist, but shown alongside work by several of his contemporaries, such as Sir John Lavery, Jack B. Yeats, Grace Henry, Patrick Hennessy and Colin Middleton, most of whom used a different style, or strategy, to respond to the social contexts that engaged Keating at one time or another in his career.

The exhibition will feature many of Keating’s better-known paintings alongside several little-known examples, and a few that had been written about but were lost to art history and are now re-discovered. The central theme that emerges is that Keating was, throughout his life, a political painter. Allied to this, his use of modern equipment: the epidiascope, camera, and from the 1930s onwards, the cine-camera, indicate his interest in modernity. By virtue of his project to continually paint emerging history and his politicised response to many aspects of Irish life in the post-colonial era, Keating’s work and circumstances epitomise the tension between tradition and modernity that is now understood to have been absolutely necessary in the quest for a national identity.

His project to create an Irish school of art, often featuring models with a personal history of political identity, and his activism through articles, broadcasts and various controversies, demonstrate that he was a painter of modern life who, far from being right-thinking and conservative, actually made a major contribution to Ireland’s cultural identity at home, and abroad. Keating’s work, particularly the images that offer critiques of the governing classes, and the socio-economic conditions, have a resounding relevance in the twenty-first century, when economic distress, and emigration have once again returned to remove families from their traditional roots.

A full colour catalogue with an essay by curator Dr. Éimear O’Connor will be published to accompany the exhibition.

A comprehensive guided tour programme and an education pack will also be available.

In addition, Seán Keating and the ESB: Enlightenment and Legacy, a celebration of the artist’s work on the ‘Shannon Scheme’ in the 1920s and Pollaphouca in the 1940s, curated by Dr Éimear O’Connor will open at the RHA Gallagher Gallery, Dublin in September 2012