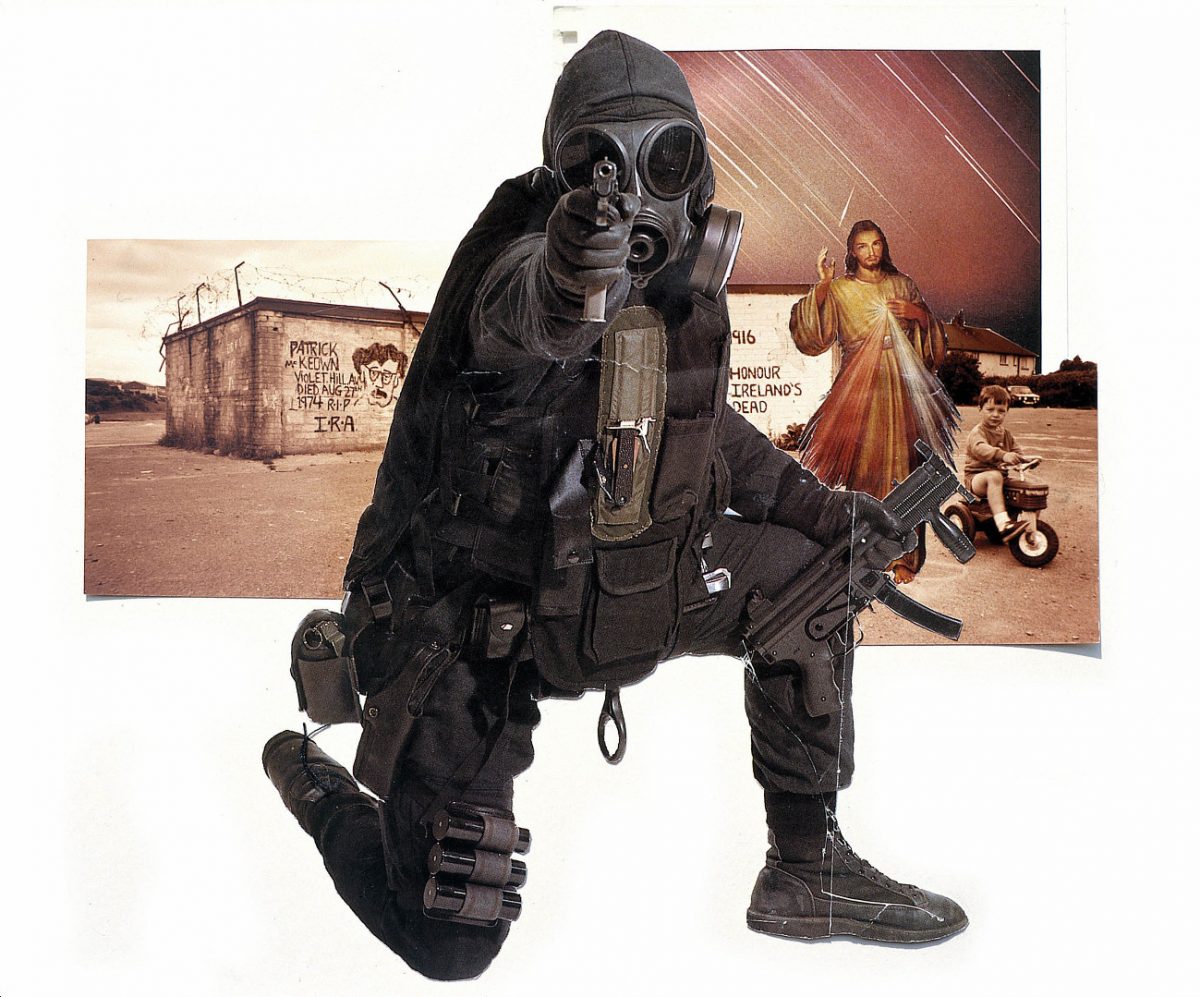 “Sean Hillen works in a space even Francis Bacon would tidy, creates collages that would give someone with 20:20 vision a headache, and is as much a cultural institution as a working artist.”

Sean Hillen: 100 Works is the first major solo exhibition of Sean Hillen in Northern Ireland, and is focused on his practice as a collagist, with works dating back to the early 1980’s.His distinctive images have been circulating in Irish visual culture for over 30 years. Having grown up in Newry in an intense phase of the Northern Ireland conflict, he studied in London at LCP and at the Slade School. His earliest works were art/documentary photos which quickly became source material to a series of series of paradoxically funny but politically-charged photo-collage works, amounting to around 70 made between 1983 and 1993, when he moved to live and work in Dublin.

In the Irish Times chief critic Fintan O’Toole wrote that they “remain the best expression of what it felt like to be in Northern Ireland during the Troubles.”

His subsequent series ‘IRELANTIS’ has appeared on over 30 book and magazine covers, and was described as “the most vivid and emblematic.. of the hopes and fears of ‘Celtic Tiger’ Ireland”.

Recently, a chance remark led to a diagnosis of Asperger’s Syndrome, which Hillen describes as “a life-changing catalyst” for a renewed personal understanding and professional momentum. One result was assistance to fully document his output of collage works (amounting to around 220 over 35 years), and attempting to bring it to a wider public. In 2016 the curator Erik Kessels discovered Hillen’s work at the FORMAT Festival, and offered to design a new book of the collages which will be released by an international publisher later in 2017.

This selection by the artist of 100 Works is represented here as a mixture of original works, many rarely-or-never seen, borrowed from private and public collections; prints in different scales and facsimile editions.

Golden Thread Gallery’s artistic vision is engaged with the fluidity of history and the multiplicity of points of view. The programme investigates how moments in time can have an irrevocable impact on perspective. Our surroundings shape how we read meaning: an event can be something or nothing depending on where it occurs or what we have previously experienced.

Admission to the exhibitions is FREE.