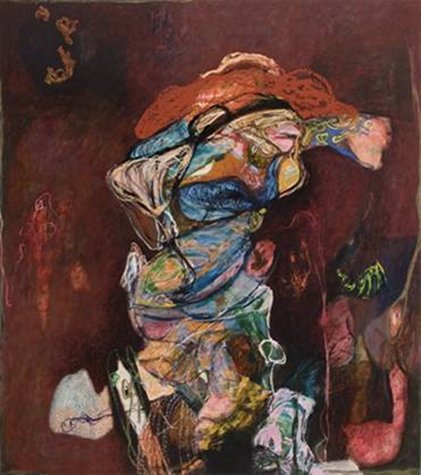 With Sarah Dwyer’s painting, surely you feel you want to pull the thread and watch the unstable painting unravel to reveal the fantastic underbelly – in these paintings, that glimpse is tantalising and close, and the feeling from them is that the paint is tangible and coiled, accumulated on the surface as a portal dreamlike images, created in the viewer’s imagination in layer on layer, never ending and descending, perhaps always out of reach.

While Dwyer’s work is exuberant, colourful and visceral from the beginning, something feels lost, perhaps mislaid, but gone missing. Or else something still there but obscured, which seem to have forms that are familiar – slipping through the subconscious like sand – in these paintings, just as you think you can see a reference, find what might be a memory, you move further into what is pure colour.

In these paintings, with the understanding of richly textured colour, of the power of line, and of elusive form, viewers might also find the enjoyment and exposure of pure painting. The impact of the size of painting on the tension and its exuberance is noted. Smaller paintings seem to have a greater yearning. At the time of writing, the exhibition is not yet hung, and a further intrigue will be how the works play off each other, and within the Kevin Kavanagh Gallery scope undoubtedly create another layer of reading within each work as well as part of the exhibition as a whole.

However… the seductive quality of Sarah Dwyer’s painting may indeed hide an endless game that the insouciant artist plays with the viewer or alternatively it may be a plotted journey through memory and suggestion, playing on association and tactile surface, plotted in a precise and organised manner. The interesting thing about Sarah Dwyer’s painting is you just do not know, and this lack of control renders the seduction ongoing.

Sarah Dwyer was born 1974 in Cork, and lives and works in London. She graduated from the Royal College of Art, in 2004, and as awarded The Sheldon Bergh Award. In 2006 she was shortlisted for the Celeste Painting Prize, and in 2007 she had a solo exhibition at Kyubidou Gallery, Tokyo. She participated in Art Futures at the Bloomberg Space, London to acclaim. Her work was featured in Daily Miracles at Josh Lilley Gallery, London 2009, and in a solo exhibition in Hands Stuffing a Mattress at Josh Lilley also in 2009. In 2010, Dwyer was included in Regarding Painting at the Kevin Kavanagh Gallery in Dublin. She brings new and beguiling paintings to Dublin.

Sarah Dwyer is represented by Josh Lilley Gallery in London