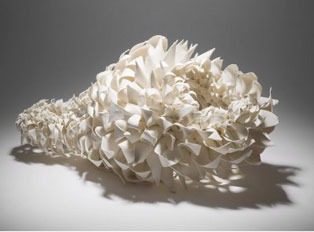 Positive Space, an exhibition of sculptural porcelain, presents a selection of recent work by two Cork-based ceramicists Sara Flynn and Nuala O’Donovan. The exhibition is presented in conjunction with the first annual Cork Craft Month, which celebrates the abundance and diversity of craft produced in Cork. Positive Space opens on Friday August 6th at 1pm in Wandesford Quay Gallery, CIT Crawford College of Art and Design’s new exhibition space. The show will be officially launched by Dr Gary Boyd, Senior Lecturer at Cork Centre for Architectural Education, a joint UCC and CIT initiative.

An engagement with the fragility and tactile characteristics of the material informs the practices of both artists as they explore volume, space, pattern and symmetry through porcelain. The dynamics of space is a prevalent concern in the development of both bodies of work, and reflects the artists’ preoccupation with geometry, form and architectonics. The exhibition Positive Space facilitates an emerging dialogue between the organic and manufactured, the singular object and its arrangement, the vessel as negative space and object as its positive counterpart.

Nuala O’Donovan achieves a sense of luminosity through delicate fractals formed in paper thin porcelain. Her delicate sculptures utilise the characteristics of fractal forms in nature, multiplying geometrical patterns to form an evolving complex object. Through meticulous arrangement of these fragments she constructs new organic forms. These exquisite objects result from an intuitive response to the direction that the structure takes as well as the irregularity in the handmade elements of the pattern. Nuala’s work is informed by an on-going interest in natural geometry and the narrative potential held in the imperfections of these patterns, the cause of which can be attributed to unique experience as evidence of the life force.

Sara Flynn’s works present an exciting contrast; each are formed of a single unit of clay, the delicacy of which subjugates its voluminous nature. These objects are the result of a perfect throwing process and are subsequently altered in a subversion of the objects’ natural symmetry. This action, in which the surface is corrupted, disrupts the space which the form occupies. Thus a tension is evoked between solidity and potential collapse. Sara draws influence from the tones, contours and textures of rural ancillary buildings and those of the natural landscape. Her engagement with these elegant sculptural vessels is supplemented with explorations of their inter relations and potential connections within the exhibition space.

Sara Flynn and Nuala O’Donovan are graduates of Crawford College of Art and Design. They hold studios in Cork and exhibit widely nationally and internationally. Mutual exhibitions in 2010 include Ceramic Art London at The Royal College of Art, London; Collect at The Saatchi Galleries presented by the Crafts Council of Ireland and MATERIALpoetry, an exhibition of contemporary objects from Ireland, American Irish Historical Society, NY, curated by Brian Kennedy.

Open Wednesday to Saturday 10am – 6pm