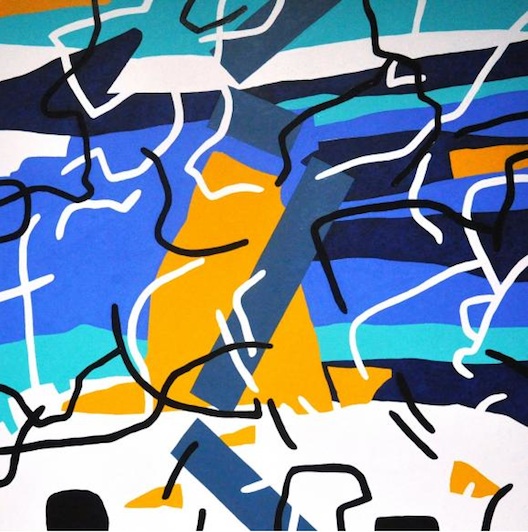 Oliver Sears Gallery is pleased to announce the first solo exhibition in the gallery of new work by Samuel Walsh.

As the title of the exhibition suggests, the artist uses the act of looking at something in a fleeting, perhaps unfocused way to begin the process of making his paintings.

He first sketches in a notepad the lines that he sees that might form the informal structures of a landscape, a building, an object or a peopled interior. These line drawings are refined and become the network of surface lines that appear in the paintings.

The second part of the process involves the application of colour which may only be a remembered sense rather than a precisely documented representation. Walsh’s work has drawn influence in colour from the hard edge of sixties pop art although the delicate underpainting and gestural quality of the brushwork lend more to the emotions of the Abstract Expressionists. However Walsh’s paintings have a unique voice and present the viewer with a different way of seeing.

Samuel was born in Wimbledon, London in 1951. Both his parents were Irish: his mother from Limerick, his father from Ennis. He was educated in London until 1968 and also in Limerick at Villiers Secondary School. He initially lived in Limerick but since 1990 has lived and worked in Co. Clare. He studied at the Limerick School of Art and subsequently took an MA in Fine Art (Painting) at the National College of Art & Design, Dublin. He also holds a NUI Diploma in Philosophy from Mary Immaculate College, Limerick. He was elected a member of Aosdána in 1997 and served as a Toscaireacht from 2007-2009. He is the founder of the National Collection of Contemporary Drawing that hangs in the Limerick City Gallery of Art.