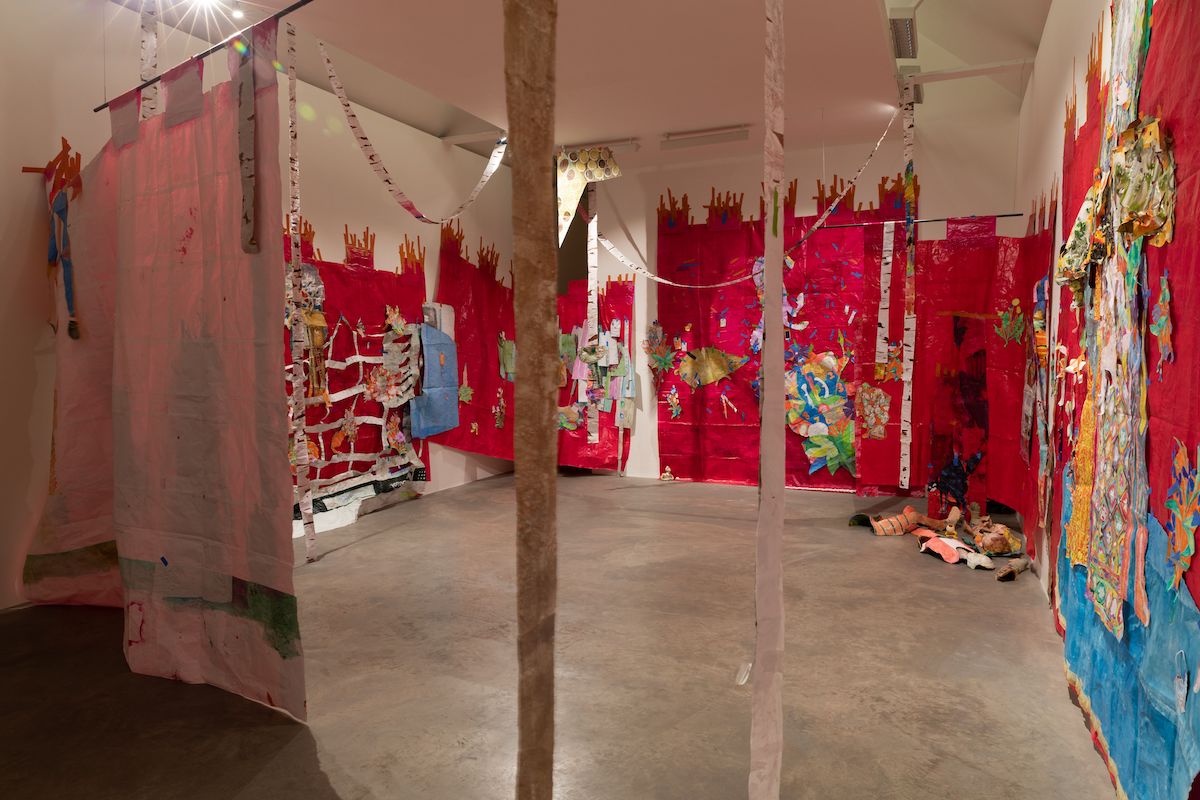 A series of large red rectangular surfaces are clustered at one end of the gallery, festooned with drawings of flowers and hands as well as a giant inhaler, a life size anthropomorphic hotdog and a pig with a knife in its side. Ceramic sculptures act as paper weights for some of them –  a roast duck, a boiled egg with feet, as well as bits of reclining bodies piled on top of each other. Elsewhere in the gallery, a lone figure lays on its side, its back to the viewer. His hip and shoulder seem sunk into the polished concrete floor. As you walk around his form, you see that his eyes are open, but pupilless and vacant. A man’s voice reverberates throughout the space. It’s telling a story which might link these disparate images and objects together.

Sam Keogh’s ‘Sated Peasant, Sated Soldier, Sated Scribe’ was originally commissioned for the basement galleries of Goldsmiths CCA in 2021. Slightly reconfigured for Kerlin, the exhibition of sculpture, collage and audio draws on pre-modern myths and motifs of abundance. The medieval myth of Cockaigne; a land of plenty where food is bountiful (it rains cheese), work abolished, and sexuality liberated features in both verse and visual traditions; most powerfully for Keogh in Bruegel the Elder’s painting The Land of Cockaigne, 1567, which shows three figures sprawled in a circular motif under a table bearing food and drink in a rural idyll (a wandering pig in the background bears a knife on its back to aid ease of carving).

Keogh mines this image for its utopian radicalism at a time of strict feudal power relations and peasant revolt. The fantasy of rest, pleasure and perpetual feasts depicted here might be read as an important contribution to a proto-communist imaginary. But Cockaigne is also a place where everything is cooked, and so closer to being dead than alive. The main figures are bloated, heavy and immobilised by their gluttony in this world of beige and brown where nothing seems to be growing, but instead slouches toward decomposition as time has slowed or stopped. In this sense, Bruegel’s The Land of Cockaigne can be read as a moralizing warning to the ‘work-shy’, that they would end up in a pleasurable but stodgy purgatory rather than Heaven. Keogh see’s these contradictory elements of the myth as being part of its persistence as fantasy. Its qualities of nonsense and impossibility don’t amount to a workable image of a potential future world, but instead appeal to the libidinal or bodily desires of the audience – things which don’t need to be understood to function.

These grotesque concoctions of image, object and detritus serve as props and visual cues for performances, but spill over with idiosyncratic detail and extraneous information – the physical remnants of a fictional world, they present an indeterminate space in which materials, memories and affects begin to smudge into each other. Keogh’s performances interweave research on diverse topics into meandering semi-fictional monologues that make surprising connections between political movements, biological processes, archaeology, housing, science fiction, or pop cultural phenomena. Like the sprawling and rebellious environments that house them, they present “a strange and abject cosmology of trash, contamination and revolt”.