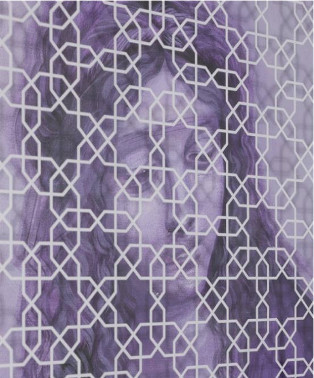 Kevin Kavanagh gallery is pleased to present this exhibition in collaboration with the Assar Art Gallery in Tehran.

Leonardo da Vinci, the original Renaissance man, was a prolific polymath whose enduring contributions to contemporary world culture, half a millennium after his death, include the most famous portrait ever painted, the Mona Lisa, and the most widely reproduced religious painting of all time, The Last Supper. A third iconic image, his drawing of Vitruvian Man, aspired to transcend the limitations of history and geography entirely, disregarding ethnic difference and other divisive factors, including gender, in pursuit of a universally valid depiction of ideal human proportions.

All of which makes Leonardo the perfect recruit to Roxana Manouchehri’s latest investigation into the many ways in which aspects of identity and vectors of identification may be coded in contemporary art. Born and raised in Iran, Manouchehri has led a peripatetic life since graduating from the Art University of Tehran, spending a significant period of time in South Korea before moving to Ireland some years ago. An early admiration for Leonardo, the byproduct of a cosmopolitan upbringing, informs this new suite of paintings, which she disarmingly describes as ‘my own detailed, monochromatic versions of ten Da Vinci portraits’. Her selection of ‘portraits’, all women, includes the Mona Lisa alongside lesser known works, providing a delicate balance of familiarity and mystery, as well as a blending of precise detail and nebulous sfumato. The paradox inherent to the figure of Leonardo, the contrast between the inexorable logic of the pioneering scientist and the enigma of the archetypal artist, is astutely reflected in the combination of up-to-date digital manipulation and old-school painterly execution by which she has generated these ghostly shades of Da Vinci’s five hundred year-old originals.

This, however, is only half the story. For each of these ten paintings is encased in a thin box-frame with mirrored sides, while the glass panel through which we view the painted image is adorned with one of a selection of geometric patterns, each derived from a specific precedent in the rich history of Islamic decorative art and architecture. In this meticulous mélange of disparate cultures one might expect the Da Vinci borrowings to prove overpowering, yet this is not the case. Far from usurping their Near Eastern settings, these spectres from the canon of European art history, trapped within their bespoke gilded cages, appear to shimmer and shrink from view behind the lattice of shadows cast across their painted surfaces. The reflection of the viewer’s own image in the mirrored surfaces of the picture’s inner frame adds to this sense of compromised access to the image of an Other. That the flowering of geometric abstraction in Islamic visual culture was related to its virulent aniconism is of relevance here, as is the fact that the patterned pane through which we view each of these pictures recalls the grille of a Catholic confessional. Clearly, we are dealing here with no simple binary opposition between East and West, but something more complex.

Born in 1974 in Tehran, Iran, Roxana Manouchehri is represented by Assar Art Gallery, Tehran. In 2012, she received the Royal Hibernian Academy Award in Dublin and the Visual Art full Stipend Award for an art residency in Barcelona.

A catalogue has been published for this exhibition designed by Tony Waddingham with a text byDr. Caoimhín Mac Giolla Léith.