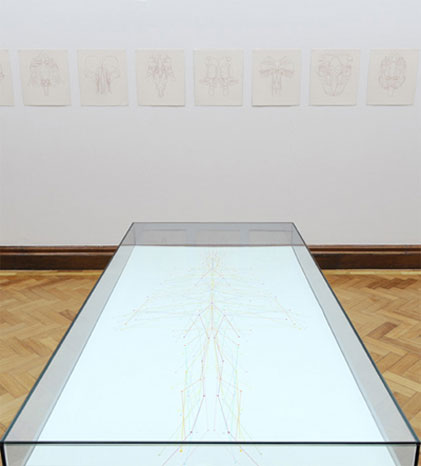 A multitude of metaphors can be extracted from the Golden Bough text by James George Frazer and it illuminates some of the systems that different societies have used to catalogue and understand the nature of the world. Applying this theme as underlining support structure for showcasing significant art practices, Dublin City Gallery The Hugh Lane has invited distinguished contemporary artists to exhibit in Gallery eight of Charlemont House, thus placing them in direct dialogue with an institutional and historical context.

Ronnie Hughes‘ work has long been interested in this idea of studying ‘nature’; the search to uncover order or pattern within arbitrary phenomena, the setting up of complex hierarchies, classifications, models and conjectures – the quest, or perhaps yearning, for meaning. Hughes’s recent works allude to tensions between fate and accident, order and entropy, between the teleological and the merely random.

Hybrid Cabinet, the title of Hughes’ installation at the Hugh Lane Gallery, is comprised of several elements: There is a series of six small paintings that in various ways straddle the border between the natural and the artificial. The wallpaper-like pattern in Template and Pladis is composed from a dismantled plastic pterodactyl that, figuratively speaking, becomes fossilised in the paintings’ surface. Deviant is a discordant corruption of an initially similar pattern. The apparent abstraction of Rime is contradicted by its title which suddenly allows a much more representational reading. Hughes see the pairing of Clatter and Fringilla as akin to a call and response between finches outside his (rural) studio – the arrangements of hard edge triangles like cartoon beaks.

Also included in the installation is a long horizontal sequence of 15 Hybrid drawings that seeks to evoke the taxonomies of a natural history museum exhibit – 15 creatures that on closer inspection turn out to be Frankensteinian amalgams of consumer products.

Finally, Anatomy Lesson is a large drawing laid out forensically upon a glass-topped stainless steel table. The drawing is derived from a series of points on a Chinese acupuncture chart but which Hughes has extended to form a unique circuit that is intended to simultaneously suggest both the physical and the immaterial.

Ronnie Hughes is represented by the Rubicon Gallery, Dublin.