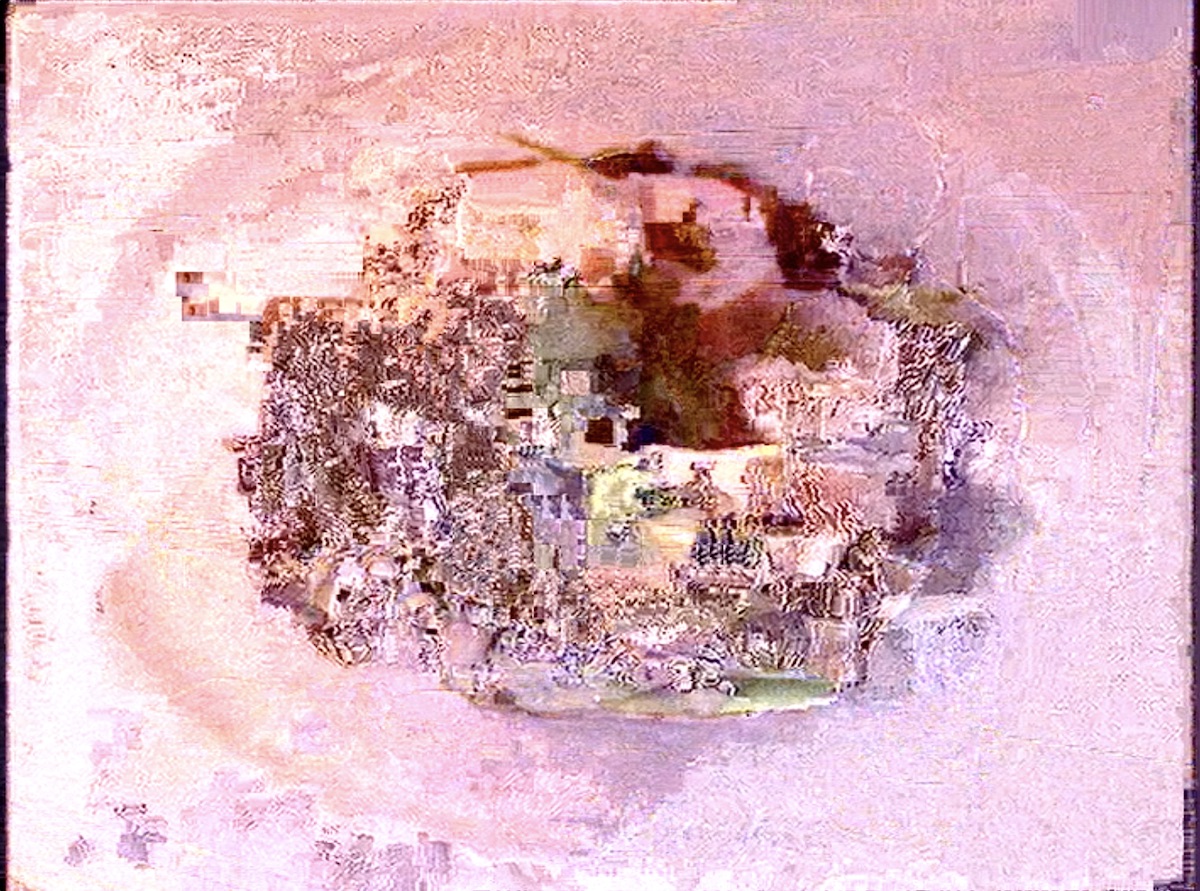 CCA Derry~Londonderry is delighted to invite you to the launch of its next exhibition, Tilt [at Windmills]. Curated by Mirjami Schuppert, the project features newly produced work by Jarkko Räsänen with Fionnuala Doran, Paul Moore and Robin Price. The newly produced works in the exhibition examine and respond to the UTV archive, which is currently digitised by Northern Ireland Screen’s Digital Film Archive.

Through the works in the exhibition, Jarkko Räsänen has embarked on his personal battle against perceived problems and injustices; he goes on an offence against surveillance apparatuses and their use of AI, and blind trust and glorification of technology, fights for animal rights and highlights violence culture. He examines old footage with the help of technology, stepping away from the content-focused approach that historians mostly use when researching archives. Given the large amount of footage available in the UTV archive, the artist has developed different methods to analyse the material, giving the exhibition distinct directions and various starting points. However, Jarkko is sceptical of any technology, not only the old ones, but the ubiquitous algorithms, artificial intelligence, etc. that are currently often considered as superior to any old technologies. His interest in the technologies of different decades makes him curious of the potential of outdated modes and models, such as Teletext, its connection to the TV magazine, and its adaptation into the use for other purposes.

Material from the archive is crypted with algorithms the artist has created to be transmitted in cyber space for civilizations that are blind to realistic imagery. Algorithms are based on processes of slicing the image file into thin strips and re- organizing them according to simple mathematical rules (and also with a some slightly stranger mutations of that). The process takes the viewer onto a metaphysical journey through video files’ structures.

The newly produced works in the exhibition examine and respond to the UTV archive, which is currently digitised by Northern Ireland Screen’s Digital Film Archive. Ulster Television was the first commercial television operator on the island of Ireland and UTV archive contains footage from the late 1950s until recent years when it was acquired by ITV. In the film reels and tapes, the turbulent past of Northern Ireland is recorded, but also the happier memories that have become part of the shared past. TV once entered people’s home and brought there the outside world, informing, entertaining and educating the viewers. Although the broadcasted material was mediated, motivated and at times biased, it provides a good glimpse into the mindsets and interests of the people consuming it. The collection preserves more mundane aspects of everyday life that might seem quite insignificant.

Fionnuala Doran, Paul Moore and Robin Price are presenting new work using Teletext technology. The works reference and play with the medium that was once a key source of information for many households pre-internet.

The project was commissioned by Northern Ireland Screen’s Digital Film Archive. Northern Ireland Screen actively seeks to involve artists in engaging with their digital archive and thus seeking new meanings of the material they house in it. These commissions are widely displayed for different audiences, both in Northern Ireland and internationally. Many of the artists previously engaging with the archive have been local, and coming in from a very different cultural background and lived experience makes it possible for Jarkko Räsänen to view the material from a new point of view, create unnoticed connections and draw unexpected conclusions.

Jarkko Räsänen is an artist working with photography, moving image, and sound art. His work is computer-based, using algorithms that create new visuals from already existing images and moving images. He is interested in questioning the realism connected to image files that we consume by deconstructing them in the spirit of glitch art – despite his work is more related to conceptual art via the strict structural operations he uses in programming them, rather than to errors. He wishes to bridge the coder-aesthetics to the traditions of experimental cinema and informalist & impressionist painting.

He graduated from the Finnish Academy of Fine Arts, Time and Space Art department in 2011. During his studies he also spent a semester at the University of Arts Berlin. Räsänen’s works have been exhibited as part of Ars17 Kiasma, Moscow 4th biennale, Anthology Archives New York, Videotage Hong Kong, Ars Electronica Linz and he has had international exhibitions, including Elevator Gallery London and Salon Dahlmann Berlin.

Fionnuala Doran is an Irish artist, living and working in Scotland. She graduated with an MA in Visual Communication from the Royal College of Art in 2015 and lectures in Illustration at the Edinburgh College of Art. Winner of the 2014 Comics Unmasked competition at the British Library, she has worked between fine art and comics, acting as a director of Catalyst Arts, Belfast’s foremost artist-led gallery, and as co-editor of Modern Times, Britain’s first magazine of graphic journalism since the 19th Century. She has participated in residencies with the Banff Centre, Canada, the European Exchange Academy, Turkey and the Atlantic Centre for the Arts, Florida. She came down with a bad case of comic-fever in 1990 and has never recovered.

Paul Moore’s work explores ideas of the journey – both to and from nations, across borders and through technology, in order to be present. Moore returns regularly to explorations of motion: the push-pull of physical and immaterial boundaries; exertion, labour and effort. He works in sonic/electronic (audio/visual) installation, and performance. He operates within the field; gathering bodies of ephemeral and ambient sounds and images, particularly whilst in motion.

Robin Price is an artist-inventor, trans-disciplinary physicist, musician and cat enthusiast. He holds an MPhys in Theoretical Physics from the University of Wales, Swansea and a PhD in Composition and Creative Practice from Queen’s University, Belfast. Recent solo exhibitions include Escape Sequenceat CCA, Derry~Londonderry, Lambent Ambient, R-Space, Lisburn and Air of the Anthropocene at University of Atypical, Belfast. His work is held in the Arts Council of Northern Ireland’s public collection and has been covered in Source Magazine, New Scientist and the Guardian.

Mirjami Schuppert is a curator, and director of Titanik Gallery and Arte Artists’ Association in Turku. In 2016 she completed a practice-based PhD in curating at Ulster University. Since 2010, she has been working as an independent curator delivering numerous exhibitions in Finland, Germany, and Northern Ireland, at both galleries and museums. The focus of Schuppert’s curatorial practice is commissioning new context and site-specific works. Her studies in Cultural History (BA and MA) have significantly impacted her practice. Her current research and practice is focused on the questions of ethics and curating.