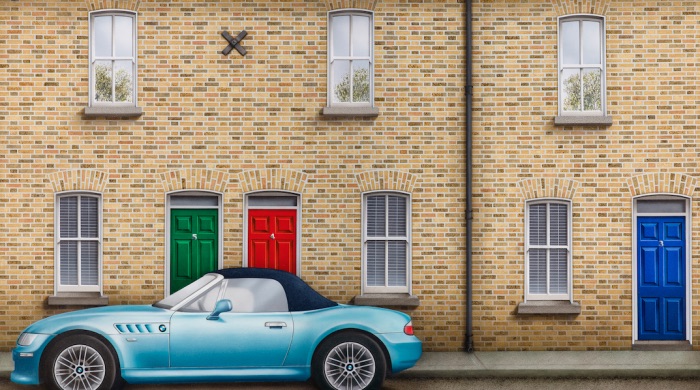 In the, over five, decades of his career as an artist, Robert Ballagh has made paintings that invite us into his domestic circumstances. Remarkably, he has resided in the same place during all those years. These works contain the intimate and the familial, critique and polemic and all carry a shared iconography from era to era.

Today, we inaugurate the latest in this intermittent series, Home, 2020. Designed in the form of a medieval altarpiece its closed panels show the outside of a series of terraced houses No. 3, 4 & 5. It bears comparison to the first in the series, No.3 painted in 1977, a swathe of forty-three years intervening between the images. They share the attention to detail where the artist builds up the façade of the building brick by brick, stroke by stroke. In 1977, the rear of a family Ford Cortina Estate pokes into the composition, in 2020 a fully rendered BMW sportscar is parked in front of the home, suggesting much has changed in the artist’s circumstances in those intervening years. No 3, depicts the artist’s two children and his wife Betty peeping out of the hall door. Ballagh, who appears in most if not all of these paintings holds a copy of an American self-help book in front of his face How to make Art Commercial – a necessary skill for a husband and father of two.

Re-occurring in nearly all of the pictures are depictions of Ballagh’s own paintings, books with legible titles, art history references, newspapers to bring in the burning concerns of the day and of course the artist himself, dressed or half dressed.  It is fascinating to compare and contrast the stages of life, depicted by Ballagh, in the eight or so domestic scenes he has made over the years.

Home, 2020, is of course a Covid painting. As we open the panels, there in the center of the extended plain of the three canvases is the Irish Independent lying on the floor with its headline, ‘COVID 19 LOCKDOWN’ and the pertinent sub-head O’ver 70s Told to Stay at Home‘ and ironically, ‘Homeless Crisis Deepens‘. Ballagh himself turned 70 in 2013. On the left hand panel we find an enclosed space – a room, a courtyard, another room, all smacking of contemporary architectural upgrading. But there is something poignant about its cleanliness – one chair, one lounger, one cup, one plate – all suggesting a solitary life. The middle panel carries all of the promise of a social space, sitting room/diner, the newspaper on the floor evidence of occupation. And then there is that nude descending the staircase, that Duchampian title that Ballagh has enjoyed toying with in past paintings, most notably in Inside No.3 from 1979. The figure depicted is that of his late wife Betty who tragically passed away in 2011. The right hand panel holds the ever present bookcase, a sliding door and a bespoke orange kitchen unit. The Japanese pictograph which is the main feature of the panel spells out BALLAGH, echoing the flat screen TV depicted on the left of the main panel which shows the artists initials RB.

Home is a secular shrine to our current circumstances – isolation, loss and confinement pervades this work. As always, Ballagh deftly captures the spirit of the age – an age we all hope recedes into memory and history in the near future.

Born in Dublin in 1943, Robert Ballagh studied at Bolton Street College of Technology and began painting in 1967 when he first exhibited as part of the Irish Exhibition of Living Art. His work is represented in many important collections including the National Gallery of Ireland, The Ulster Museum, Dublin City Gallery The Hugh Lane, Crawford Gallery and the Albrecht DŸrer House, Nuremberg. For 10 years he chaired the Irish National Congress, a non-party organisation working for peace in Northern Ireland, and was president of the Ireland Institute, a centre for historical and cultural studies. He served as the first chairman of the Artists’ Association of Ireland when it was founded in 1981, and he is a fellow of the World Academy of Art and Science. In 2006, the RHA showed a major Retrospective of Ballagh’s work.