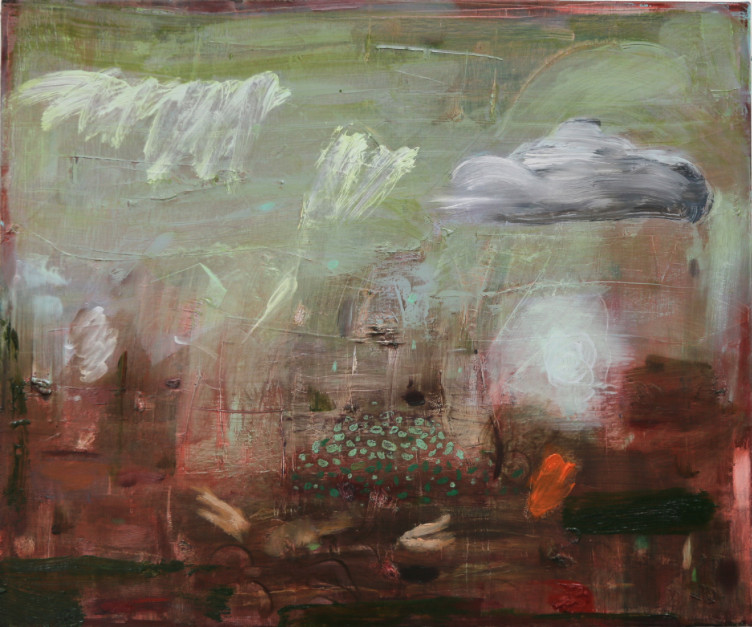 Painters have a complex relationship with their source material. While it provides them with vital information and can often stimulate certain illuminating reactions within them, it can also act as a self-imposed limit, which, once introduced, must be escaped from.  Slips and Glimpses, an exhibition of new work by Anna Bjerger and Robert Armstrong delivers moments of both vivid immersion and profound escape.

Bjerger’s paintings often reference found imagery such as old magazine clippings. While the figures and objects which populate her paintings may seem largely unrelated, they are connected by a curious sense of timelessness. Or rather, that they exist in a time to which they do not belong. Through her paintings Bjerger provides a home for these displaced images, while simultaneously pointing to their outsider status. Their treatment is at once tender and removed. Cotton, for instance, depicts the torsos of two children wearing white t-shirts. One of the children’s t-shirts appears to be spattered with blood. But on closer inspection, the spatters extend extra-diegetically onto the t-shirt of the second child in a manner that could only have been made by the external hand of the painter. This deceptively simple gesture creates a mysterious tension between the world within the painting and that without. Such devices serve to both disorient and intrigue, allowing us glimpses into moments of great intimacy, to which we remain none the wiser.

Similarly, Armstrong’s paintings act as a space in which time and reality are made lusciously slippery. Drawing on sources such as masterworks from art history, ancient archeological sites and biblical narratives, Armstrong’s worlds both collide and withdraw. The cloud, a recurring motif in paintings such as A Cloud for Sigiriya and Humility after MW will often act as a unifier of these many worlds, bringing together earth and sky, figuration and abstraction, past and present, by floating or resting gently in their interim. Armstrong’s paintings search through the unknowable terrains of the past. But through his energetic and gleefully inventive use of paint, it is always the unforeseen, the strange, the new that emerges.

This exhibition combines the practices of two greatly accomplished painters, whose mutual admiration and respect for one another and for their chosen medium is distinctly evident. Through their work, both painters offer a surface on which content and materiality is treated with equal importance. Within these paintings, the origin and its varying forms of transition can safely co-exist, undisturbed by the passing of time and its consequences.

Robert Armstrong (b.1953) lives and works in Dublin. Armstrong is Head of Painting in the National College of Art and Design and is a Founder Member of Temple Bar Gallery & Studios, Dublin. Recent solo exhibitions include a presentation at VOLTA New York (2015), and Assumptions (2014) Kevin Kavanagh Gallery, Dublin.