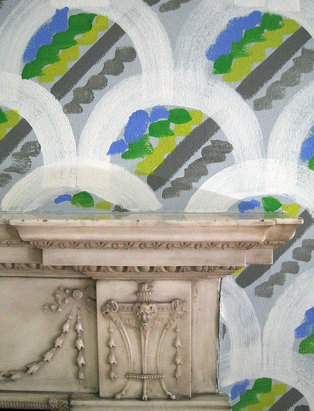 The work of Richard Tuttle is at times so slight and seemingly impermanent that it demands a rethinking of what we perceive an artwork to be. He employs humble, everyday materials to stretch the boundaries of what we recognize as the conventions of art. This is undertaken with an immense consideration of the civilizing values that shape and reshape our perceptions of reality.

Richard Tuttle’s prolific artistic output began in the 1960s with an early emphasis on the form of three-dimensional objects. However, he commonly refers to his work as drawing rather than sculpture, underlining the diminutive scale and idea-based nature of his practice.

Triumphs takes its title from the Italian poet Petrarch (1304–1374) whose renowned poems ‘The Triumphs’ Richard Tuttle was reading while preparing for this exhibition. Classical Rome in the time of Emperor Augustus, the Augustan aesthetic and its revival in neo-classicism form part of the framework for the exhibition. For Triumphs, The Hugh Lane and its history also became part of the raw material that Richard Tuttle employed. James Caulfeild, the 1st Earl of Charlemont (1728-1799) translated Petrarch’s poems, a manuscript of which is in the Royal Irish Academy, Dublin. Tuttle’s exhibition takes place in Charlemont House, one of the earliest neo-classical townhouses in Dublin, as well as in the Gallery’s new wing. In working with Richard we have realised that he always keeps things in motion—the question lies with the viewer who is never second guessed by the artist.

Richard Tuttle is acknowledged as one of the leading Post-Minimalist artists. He first exhibited in New York in the renowned Betty Parsons Gallery in 1965. His reputation rests on his persistently unconstrained art practice using improvisational working procedures and non-traditional materials.

This exhibition begins with work from the mid-1960s and continues through to the present. The main exhibition, selected by the artist, reveals a significant concentration on recent drawings and a context is provided by our selection of earlier work—an overlapping triumph which further illuminates Tuttle’s processes and the current installation. Included is Village V (2004) in Lord Charlemont’s salon, which was first exhibited at the Drawing Center, New York, in 2004 as part of Tuttle’s exhibition It’s a Room for 3 People. Village V is one of five installations that set out to examine the canon of Drawing: Village I (Motion), Village II (What cannot be seen), Village III (Light Blue), Village IV (Naming), and Village V (Shadow).

“The benefits of freeing drawing from a canon are obvious, and I would like it to remain free forever.”—Richard Tuttle

Richard Tuttle has always questioned the perceived supremacy of the verbal as the most elevated form of expression. His oeuvre of books therefore is as radical as his drawings. Since his first book, Sparrow, 1965, a visual narrative in a sequence of coloured forms, he has since substantially extended this body of work. Richard Tuttle Books, curated by Logan Sisley, reveals a significant activity for the artist and is on exhibition in Gallery 18.

An artist of seminal importance, Richard Tuttle has exhibited extensively worldwide. He was selected for Documenta 5, 1972 and Documenta 7, 1982, and represented the U.S.A. as part of a group exhibition at the 37th Venice Biennale, 1972. He was also selected to exhibit at the Venice Biennale in 1997 and in 2001. Richard Tuttle showed at the Douglas Hyde Gallery, Dublin, in 1997 and this is his first exhibition at The Hugh Lane.

This exhibition is accompanied by a fully-illustrated catalogue with texts by Thomas McEvilley, Richard Tuttle, Barbara Dawson and Michael Dempsey, which is available in the Gallery bookshop.