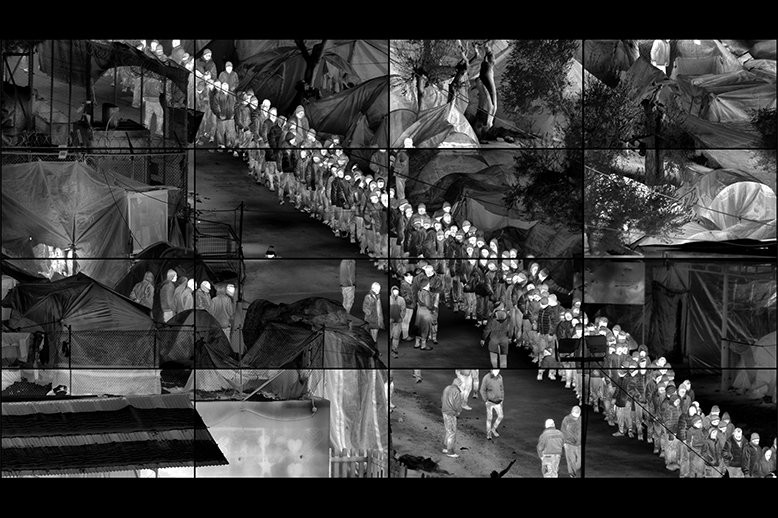 The Butler Gallery in partnership with Kilkenny Arts Festival is delighted to present the Irish premiere of two acclaimed installations by the award-winning Kilkenny-born artist Richard Mosse.

Mosse’s work documents the tragedies of our times. His video installations Incoming and Grid (Moria) were made in response to the ongoing migration crisis in the Mediterranean.

To make Incoming, Mosse employed a highly specialized surveillance camera designed for military use that captures images by detecting thermal radiation, including the heat of a human body, from more than eighteen miles away, day or night. The black, white, and grey tones register temperature rather than colour and visible light, exposing the intimate stories of these refugees while providing a veil of privacy, isolating the plight of individuals while rendering them emblematic of humanity. By subverting this weapons-grade technology, intended for border enforcement and to track insurgents, Mosse hoped to reveal the “harsh, disparate, unpredictable, and frequently tragic narratives of migration and displacement.”

Made in collaboration with composer Ben Frost and cinematographer Trevor Tweeten, and filmed in six countries across three continents, Incoming is a highly immersive experience. Mosse presents viewers with the sights and sounds of a contemporary crisis: warm handprints lingering on hypothermic bodies, desperate cries and heroic efforts, prayers amidst chaos and mass confusion. Together these elements create an unsettling yet mesmerizing experience that aims, in Mosse’s words, “to implicate the viewer within the work’s gaze, to force the viewer to confront their own participation on many levels.”

Incoming will be exhibited in the double-height gallery at Evans’ Home (itself once an almshouse, the refuge of its day) and Grid (Moria) – a 16-channel installation will be mounted in the grounds of Evans’ Home.

Utilising the same military-grade thermal camera, Grid (Moria) turns its gaze on the notorious site of Moria refugee camp on the Greek island of Lesbos. The camp of Moria was burned in protest in September 2020, leaving 13,000 asylum seekers without shelter. Grid (Moria), made in 2016-17, depicts densely planned provisional dwellings surrounded by razor wire fences, security gates and loudspeakers, evoking scenes from a concentration camp inhabited by asylum seekers, which the camera registers as thermal traces of radiant bodily warmth. Each screen plays back the same footage at different intervals, creating a visual equivalent of what is known in music as a ‘perpetual canon’.

With the world in turmoil, and the threat of further mass displacements to come, Mosse’s work asks timely, urgent questions about the ways in which the West tends to think, or not think, about refugees.Grid (Moria) is presented as part of Brightening Air | Coiscéim Coiligh, a nationwide, ten day season of arts experiences brought to you by the Arts Council. To see the full Brightening Air | Coiscéim Coiligh programme, visit www.brighteningair.com