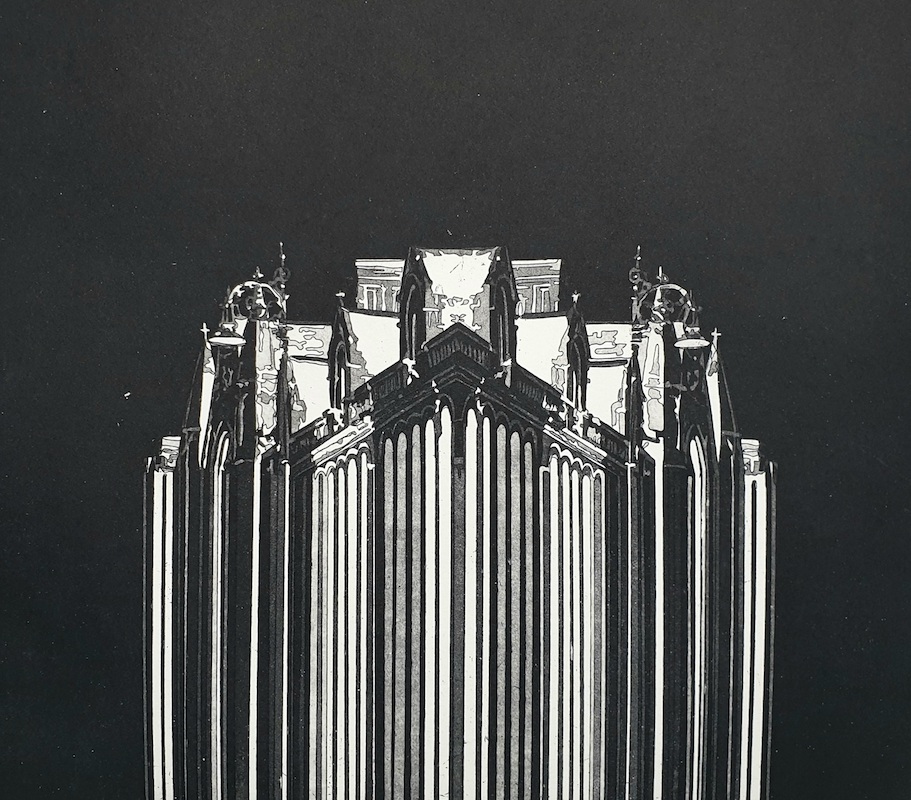 Featuring new works by artists Ria Czerniak-LeBov, Richard Lawlor and David McGinn, Sub/Plot is an exhibition of Fine Art Prints, drawing influence from cinema, narrative and the mechanics of lens based media. With visual references to Andrei Tarkovsky, David Lynch and Film Noir, these artists have a shared language, creating and staging scenes into which the viewer may wander. Lawlor’s use of theatrical lighting, pose and costume seem to capture his subjects in action. Similarly, McGinn’s compositions feature intrigue, an inexplicable sense of foreboding, despite there being no indication as to events we are bearing witness to. Czerniak-LeBov’s etchings, unpeopled and distorted, reference the medium of film itself. Static, negatives and the signature monochrome shadows of Noir are employed to create spaces that are both familiar and utterly surreal.

Ria Czerniak-LeBov is a printmaker and multidisciplinary artist from Dublin. A full-time member of Graphic Studio Dublin, she works predominantly in etching and aquatint. In these prints Ria explores the relationship between old and new technologies. Through a visual vocabulary drawn from cinema, photography, pixelation and digital glitches, she employs traditional print techniques to capture our rapidly changing visual landscape.

Richard Lawlor is also a Dublin based printmaker and member of Graphic Studio Dublin. This series of etchings is based on a mix of photography and film stills. He portrays people who are both renowned and unknown in the public domain, each piece telling a story, often tragic or mysterious. Through their narratives, each person has enjoyed a brief flash of notoriety, thus the work imbues temporality, evoking the fragmentation of reality and our fragility as humans. They engage the viewer, allowing the drama of our existence to creep into the works, provoking thoughts and the urge to discuss our condition and meaning of life.

David McGinn is a printmaker based in Black Church Print Studio, Dublin. Working in a variety of mediums, predominantly screenprint, etching and aquatint. In this body of prints David captured stills from Andrei Tarkovsky’s 1979 masterpiece Stalker, appropriating the films bleakly beautiful screen captures, manipulating them digitally and taking them through an array of printmaking techniques. These works are explorations of space and non space. The liminal no man’s land depicted, the cinematic space and the printed surface itself, all merge to create an uncanny landscape.