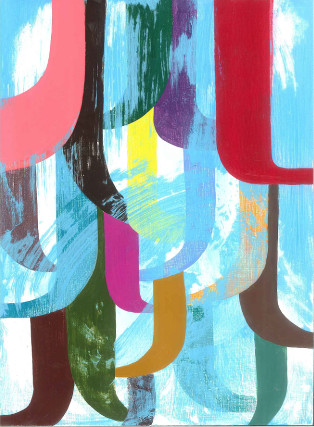 The Green On Red Gallery is delighted to announce the reopening of the gallery in Spencer Dock, Dublin 1 ( 150m north of Spencer Dock Luas stop ) on December 11, 2014 with Renew, an exhibition of new work by gallery artists Gerard Byrne, John Cronin, Mary Fitzgerald, Damien Flood, Mark Joyce, Caroline McCarthy, Ronan McCrea, Alice Maher and Bridget Riley. Renew will be the first exhibition in the new gallery and continues until the end of January 2015.

Renew will feature a new suite of 9 prints by Alice Maher shown here for the first time. These are the first new works by the artist seen since her highly successful solo exhibition, Becoming, in the Irish Museum of Modern Art in 2012 and her recently published monograph, Resevoir, published in 2014 by ROAD Publications, Dublin. The new works are marked by a riot of colour and play with motifs of corporeal and symbolic metamorphosis. In God’s little helper the female protagonist is overcome with a coat of human hair, as Magdalene was before ( or after ? ) her.

Gerard Byrne‘s new Kodak Wratten Filter Systems unique photographs come as close in photography to abstraction as is possible due to the lighting and arrangement of the single colour, century-long, glass filters. Byrne’s approach to the medium regularly makes poetic and witty side-references to the history of painting, theatre and photography itself. The result here recalls minimalist ideas of reduction and repetition and a solipsistic pragmatism.

Mark Joyce presents two new paintings on panel that recall some of his earlier ’90’s oil on canvas paintings. Their playful shapes echo letters and numbers but never spell out their message, as a Mel Bochner might.

Damien Flood‘s new paintings are stripped back with a fresh and exciting economy. They hang on a knife-edge between bringing us to familiar and mysterious, unknown worlds.

Mary Fitzgerald uses hard-edge and fragile materials that make the most of their reflective qualities and expand the moment of perception. The viewer is involved and engaged in unexpected twists and turns.

In anticipation of her forthcoming solo show at the gallery, Caroline McCarthy presents Woods in November ( 2014 ) acrylic on canvas. This is a dazzling trompe l’oeil rendition of the most inconsequential subject brought centre stage. We are made to question our own belief systems and moral code in an upside-down world so convincingly portrayed.

Ronan McCrea will exhibit new photographs from his ” reprographic ” project that meditates on current questions about the fin de siécle, as he sees it, of the photographic era in late or post Post-Modernism. These works have an authority borrowed from the conventions of the medium but can point to new conclusions.

Large Fragment by Bridget Riley has an undeniable elegance and mastery that, while harking back to the cut-outs of Henri Matisse, is both fresh and compelling.

The Gallery will open to the public from Wednesday-Friday, 10-6pm and on Saturdays11-3pm.

We look forward to welcoming you to the new gallery and to Renew. Bí linn.