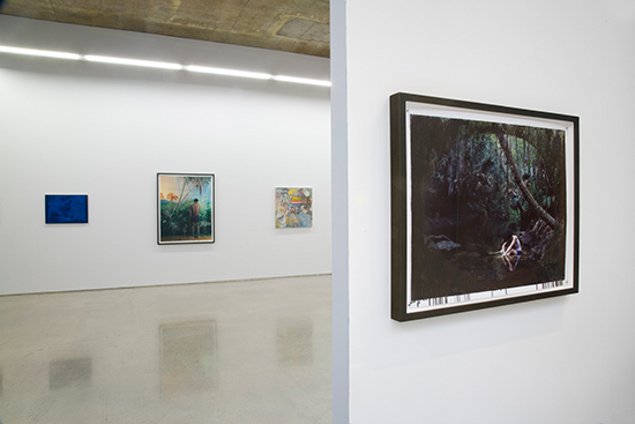 Is it an imprimatur of sorts for Painting when the Good Doctor examines a canvas in detail, appeals to Amy Pond to look closely, finds the tortured creature in the window of the provençal church painted by Van Gogh, and goes back in time to erase the Painter’s demon?

If we regard the creation of the television drama as an information system that de-codes the world we live in – and many theorists do – then we can realistically include the ruminations on the multi-planar nature of Time by Dr. Who as relevant to the understanding of the planes on which we observe the world, and within the surface that the Painter works on and he/she works on it.

To put this in context, a recent episode of the TV serial Dr. Who concerned a demon in a Van Gogh painting in exhibition, recognised by the time-travelling Doctor, who realises the demon itself is also trapped in a time warp and needs to be released. This undoubtedly gives Vincent temporary respite and coincidentally saves mankind from the distressed and lost demon from another universe. In travelling back to the time of the Painter, the artist himself is proposed as medium, as super-sensitive, as someone who sees things in multiple spheres, who understands that colour is not just what we see but is often what we feel, and that surfaces are not simply what you see in front, but have many different views. These ideas are those that Picasso subsequently pushed beyond its limits – as indeed the Doctor also refers to – and which allow us to envisage the Contemporary World where memory, experience and event can co-exist with the future, where we can articulate different points of view and plane.

It is also the stuff of the Multiverse, as against the Universe, which was discussed in the Royal Institution in London (2008), and contemplates the eye seeing different planes contemporaneously. It is significant that in popular culture in 21st century, that painting is still regarded as a place to see things differently and see different things – as they are, as they might be, and with potential to influence. Just as the canvas of the The Matrixpostulates the breakdown of surface and suggest that decomposition and re-composition can arrive at a different way of seeing, at a greater understanding of surface and depth, with a strong dependence on the tool and how it is used: in the Matrix, the tool is film and special effects and in painting, oil paint and its tactile manipulation. This group exhibition bears scrutiny with this in mind.

These painters have different ways of seeing. When considering this exhibition, these are Artists who continue what Artists do, creating the understanding of who painters are by the very process of what they do.