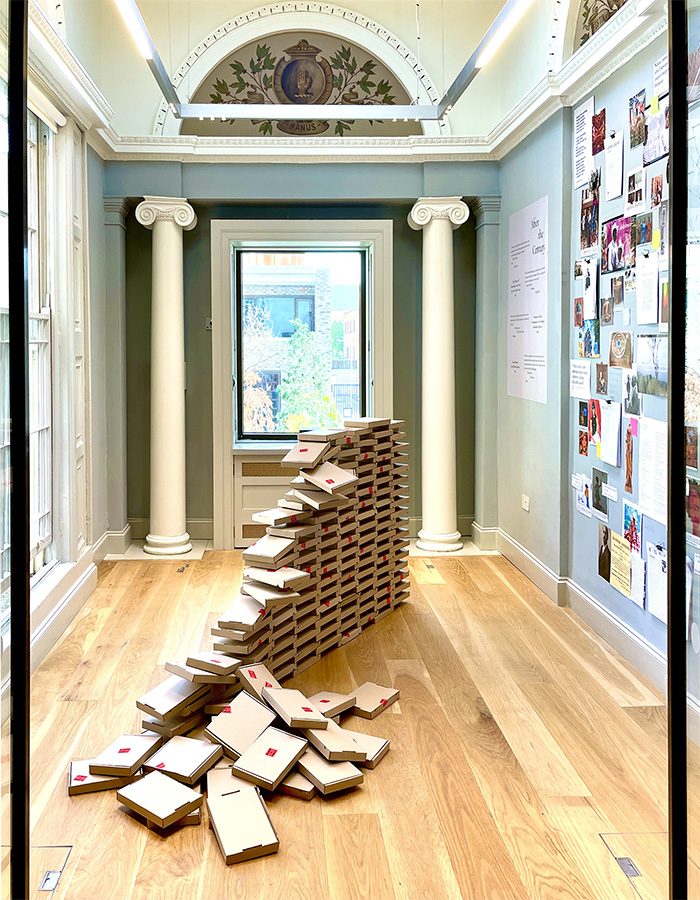 RE/MAINS OF THE DAZE: an exhibition in three courses

A three-part exhibition at the Goethe-Institut Irland’s Return Gallery curated by Art in the Contemporary World (ACW).

RE/MAINS OF THE DAZE: an exhibition in three courses is the culmination of research into three historical exhibitions: Lucy Lippard’s ‘Numbers’ shows (1969-1974), Jean- François Lyotard and Thierry Chaput’s Les Immatériaux (1985) and Okwui Enwezor’s The Short Century: Independence and Liberation Movements in Africa, 1945–1994 (2001-2002).

Each exhibition occupies a moment in the history of art as a disruption to the modernist construct of the exhibition. Lippard reimagined the dichotomy between artist and curator and took the exhibition beyond the walls of the museum. Lyotard and Chaput troubled the idea of the singular subjective experience and materialised the de-centered and fragmented condition of postmodernity. Enwezor challenged Eurocentric museum spaces and exhibited African art in relation to independence and liberation movements of the 20th century.

The show at the Goethe-Institut presents three speculative projects designed by ACW’s incoming 2021 postgraduate cohort, each sharing the task of viewing a past exhibition through archival documents. RE/MAINS OF THE DAZE: an exhibition in three courses plays on the idea of the ‘remains’ of modernism filtered through the ‘daze’ of postmodernism, a self-referential fugue state that endures through historical habits.

RE/MAINS OF THE DAZE: an exhibition in three courses is presented by the Goethe-Institut Irland in collaboration with the National College of Art and Design in Dublin. ACW is the theory/practice MA/MFA in the School of Visual Culture at the NCAD.

Due to ongoing level 5 restrictions the Goethe-Institut Irland is closed to the public at present.

As part of RE/MAINS OF THE DAZE: an exhibition in three courses at the Goethe- Institut, c. 200 presents a response to Lucy Lippard’s series of ‘Numbers’ exhibitions between 1969-1974, in the Return Gallery and various locations in Dublin.

Lippard’s 2,972,453 exhibition (1971) used suitcases to transport the artworks and assembly instructions to Centro de Arte y Comunicación in Buenos Aires, Argentina. The idea of an exhibition in a suitcase underpins the ‘dematerialized’ and easily deployable approach to curating c. 200. Echoing Lippard’s desire to avoid ‘precious object syndrome’, the show uses materials that are transient and easily discarded.

Lippard favoured the blurring of lines between artist and curator and frequently referred to herself as a ‘compiler’. The by-passing of the regular gallery system with its inherent commodification of art led her to curate exhibitions on the margins of the art system, a theme explored in c. 200. In the Return Gallery, 200 empty cardboard boxes have been stacked into a tower and then deliberately toppled to represent the number of cultural institutions and galleries in Ireland that have been closed due to the Covid-19 pandemic. Two adboxes near the Goethe-Institut’s premises in Dublin display parts of c. 200 ‘outside of the frame’. In addition, images of the cardboard boxes with iconic red ‘Closed to Public’ stickers have been photographed throughout Ireland outside closed art institutions.

For 2,972,453, the participating artists who could not travel to Buenos Aires to install their work scrawled their installation instructions on index cards for gallery staff. The ‘catalogue’ for c. 200 presents a series of unbound index cards with selections of handwritten quotations from Lippard and others, a typed essay, photographs, hand drawn maps and other materials related to the ‘Numbers’ exhibitions.

In developing their response to Les Immatériaux, the NOUVEAUX IMMATÉRIAUX team reflected on the questions: “What is the materiality of today’s world, and is there a graspable aspect to our information society?”

NOUVEAUX IMMATÉRIAUX translates the mediation strategies from Les Immatériaux by using a combination of found and original audio material to explore the im/materialities of the 21st century. The resulting experimental acoustic symposium draws on several months of studying original materials from the 1985 exhibition and conducting linguistic experiments on themes immanent in technologies of then and now. Where the original audio featured predominantly white male speakers, this new response gives priority to female, queer, and non-Western voices.

Alongside the audio guide, the exhibition includes a transcription of a discussion between the NOUVEAUX IMMATÉRIAUX team members on their exhibition’s contents, contexts and process, created using speech-to-text technology. Visitors are encouraged to leaf through the pages, explore the subjects within, and get an insight into the research and development process for this presentation.

Philosopher Jean-François Lyotard and curator Thierry Chaput developed Les Immatériaux at Centre Pompidou in 1985. Covering the entirety of the newly founded museum’s fifth floor, the exhibition was split into 31 zones, each of which dealt with a different aspect of postmodern life. As viewers journeyed through the labyrinth of artworks and technological artifacts, they were accompanied by an experimental audio guide which transmitted philosophical and literary texts, music and sound compositions through a network of radio signals in the space, creating associations with the objects and ideas on display. The exhibition catalogue included transcripts of a conversation on more than 50 keywords relevant to the exhibition’s contents and context, conducted between writers, artists, philosophers and thinkers and created using a very early form of internet technology.

The audio and text of NOUVEAUX IMMATÉRIAUX, as well as an extensive list of sources quoted and sampled, can be accessed online at acw.ie or by using the QR code in the exhibition space.

After the Century focuses on research conducted around The Short Century exhibition by Okwui Enwezor. The presentation displays the multiplicity of African modernism in a mix of mediums and methods, echoing Enwezor’s approach in his 2001 and 2002 shows.

Installed in the Return Gallery’s south wall, After the Century consists of collaged images, quotes, texts and other findings that emerge as the group’s mediation on The Short Century. It aims to inhabit the multiplicity of African modernism that Enwezor invested his research in, as well as point to the present moment of contemporary art on the continent. A web-like graph displays the multi-faceted method of The Short Century, spanning the 59 artists involved, their 22 countries of origin and the partial colonial history of each country. Both ‘formal’ and ‘informal’ display methods are used, from vinyl posters to sticky notes, masking tape, handwritten notes and printed documents.

The group’s frequent conversations around related questions of Irish post- colonialism/imperialism is presented in a fictionalized brochure that imagines events that could have taken place alongsideThe Short Century had it travelled to Ireland. The document attempts to interrogate the insular understanding of colonialism within Ireland and the potential for The Short Century to challenge Irish narratives and beliefs about the past and present by placing the two postcolonial locations in an overlapping sphere.

In 2001, the survey exhibition on African modernism The Short Century: Independence and Liberation Movements in Africa, 1945–1994 was exhibited at the Museum Villa Stuck, Munich. The exhibition then traveled on to Martin-Gropius-Bau in Berlin, and again in 2002 to Chicago’s MCA and New York City’s MoMA PS1. The exhibition was curated by the Nigerian art critic, writer, poet, curator and educator Enwezor and was the first to exhibit the array of African visual art, music, architecture and textiles that are tightly bound to the various African independence movements of the 20th century. Within the exhibition, Enwezor interrogated the emergence of African Modernity and its interrelation with independence.

“I think the exhibition is self-sufficient in terms of what it provides,” said Enwezor in an interview with Carol Becker about these shows. “Even I, as curator of the show, am overwhelmed when I walk through it because it has such an incredible emotional resonance. The exhibition has been designed to be inside the head of the visitors, what I call the tide of voices moving back and forth, carrying you forward, stopping you. It’s an experience that a book cannot provide.” (Art Journal, 2002)

After the Century can be viewed on acw.ie.