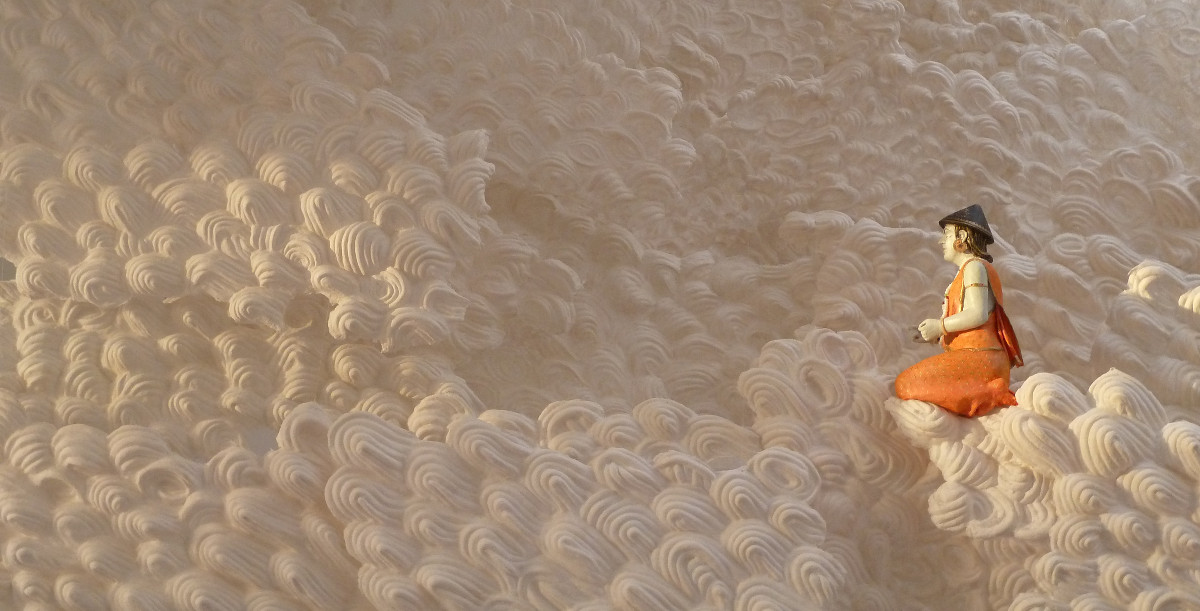 The artist says of her work ‘For this exhibition, I have made a three dimensional version of an early 19th century Indian painting. It is part of a folio called the Nath Charit which deeply affects me. I have also made a series of 150 x 50 cm drawings on rice paper, combining elements of the painting with diagrams of the senses. This is the first time I have made work based on an existing piece of visual art.

Until the work was nearly completed, I knew little about the painting. Recently I have discovered that despite recognizable elements, the work essentially remains an enigma. No accompanying text has ever been found. To convey a sense of spaciousness and lightness and so that it can float in the air within the empty gallery space, I decided to make the piece from cast paper, made by putting very thin layers of cotton and abaca fibre pulp in plaster moulds. What interests me about the painting, and what I am attempting to convey in my version, is that it takes metaphysical questions almost impossible to put into words, and depicts these in an almost diagrammatical way without losing a mysterious presence.’

Art historian Catherine Marshall describes Rachel Parry as an ‘exceptional artist’ who ‘draws on materials and cultures from all over the world to make unique and highly symbolic objects. She is concerned to draw attention to significant aspects of human experience…and the processes through which the objects are created are as symbolic as the product.’ The work for Cosmic Oceans, like many of her pieces, entail a considerable amount of time and attention to minute detail in their making. Robert O’Byrne observed that Rachel Parry is able to take up the ‘most mundane material and through a combination of dexterous imagination and manual precision, transform it into something truly remarkable.’