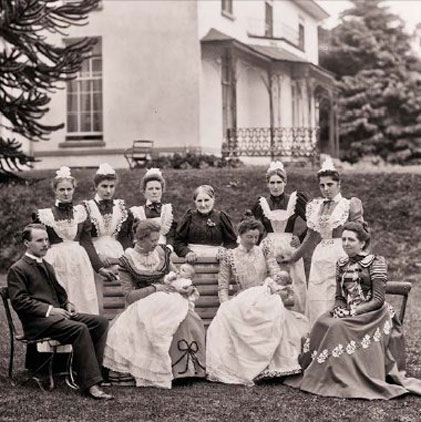 The exhibition Power and Privilege: photographs of the Big House in Ireland 1858-1922 features a selection of photographs taken between 1858 and 1922. These are divided into six main themes: gardens and landscape; employees; transport; entertainment and recreation; the arts and sciences; and family life. They are drawn from the National Photographic Archive’s collection of 630,000 images, the world’s largest collection of Irish photographs dating from 1840s to the present. Many of these photographs have never previously been on view to the public.

Some of the images are of homes that remain famous landmarks: Ashford Castle in Co Mayo; Carton House in Co Kildare, and Curraghmore, Co Waterford. Others, such as Castleboro, Co Wexford and Moydrum Castle Co Westmeath have long since vanished, while Tollymore Forest Park, Co Down is now owned by the Department of Agriculture, Northern Ireland, and Woodstock gardens Co Kilkenny is run by Kilkenny County Council.

The oldest photographs in the Power and Privilege exhibition are drawn from the collections of wealthy amateur photographers such as Luke Dillon, 4th Baron Clonbrock and his wife Lady Augusta, and were taken between 1860 and 1930.

Of the 87 copies from the National Library of Ireland’s late-nineteenth and early-twentieth century photographic collections on display in the exhibition, many were generated by commercial firms such as William Lawrence in Dublin, AH Poole in Waterford, and the Dublin-based professional photographers James Simonton and Frederick Holland Mares.

The Clonbrock Collection photographs were taken by members of the Dillon family between 1860 and 1930. As well as chronicling most aspects of daily life on the Clonbrock estate in Ahascragh, Co Galway, this collection includes images of estate staff, family members and neighbours, as well as images from the travels of friends and family in Ireland. The William Lawrence Collection (1865-1914) primarily features topographical scenes throughout Ireland, but also features people, activities and interiors. The Stereo Pairs Collection mainly comprises picturesque scenes from 26 Irish counties. It is so called because photographers used a camera with two lenses side by side, simultaneously taking two virtually identical images; the mounted print was viewed through a stereoscope, creating a three-dimensional effect. The AH Poole Collection mainly comprises work commissioned by clients from Waterford city and county, New Ross, Tipperary South Riding, and south Kilkenny between 1860 and 1883.

Among the wide selection of images contained in the eight original photographic albums from the 1860s to 1912 are:

• Images of commercial views of Killarney

• A ladies bicycle race thought to be at Moydrum Castle, Co Westmeath

• People, activities and exteriors of Ross House at Moycullen, Co Galway, which was the home of suffragist Violet Martin who achieved fame for her literary collaborations with Edith Somerville

• The landscaped demesne at Carton House in Co Kildare, which was laid out in the eighteenth century by James FitzGerald, 1st Duke of Leinster and his wife Lady Emily

• Playing croquet on the lawn at the Clonbrock estate

• A group of gardeners being directed by the lady of the house at Monivea Castle, Athenry, Co Galway

• Women participating in an otter hunt in Curraghmore, Co Waterford.

Power and Privilege: photographs of the Big House in Ireland 1858-1922 draws from two types of image originals – glass plates and period photographs in photographic albums. It continues at the National Photographic Archive in Temple Bar, Dublin until Spring 2011. Admission is free.