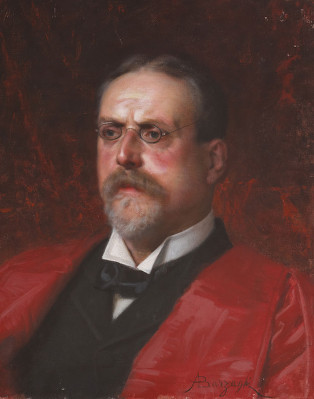 The RHA does not actively acquire work for its collection but relies on gifts and donations. As artists are elected to the membership of the Academy they are required by statute to present the Academy with a diploma piece for the collection. These presentations will form the core of this exhibition with works by Michael Warren RHA, Maria Simonds-Gooding RHA, Michael Cullen RHA, Richard Gorman RHA, George Potter RHA and Vivienne Roche RHA amongst other Members.

On exhibit will be the most recent Presidential portrait of Stephen McKenna PPRHA by Michael O’Dea RHA that was first presented at the last Annual Exhibition. Also, and for which the Academy is vey grateful, some recent gifts from James Coleman HRHA, F.X Buckley and jointly from Michael Corrigan and Mary Kilcullen.

Antoine Barzaghi-Cattaneo’s portrait of James Brenan RHA, a gift to the RHA Permanent Collection by MIcheal Corrigan and Mary Kilcullen, was first exhibited in the RHA Annual exhibition in 1893. Barzaghi-Cattaneo lived in the UK between 1887 and 1895 before returning to Ticino, Italy. James Brenan RHA (1837 – 1907) was one of the most influential figures in the history of Irish art of the 19th century. He studied at the School of Art in Leinster House, the Royal Hibernian Academy School and the Royal Dublin Society school of Drawing before leaving for London where he studied painting under Owen Jones and Sir Matthew Digby Wyatt. In 1860 he was appointed Head Master of the Crawford School of Art, Cork – a position he held until 1889. James Brenan RHA exhibited numerous paintings at the RHA between 1861 and 1906. His paintings were often realistic genre painting of Irish social and provincial life.