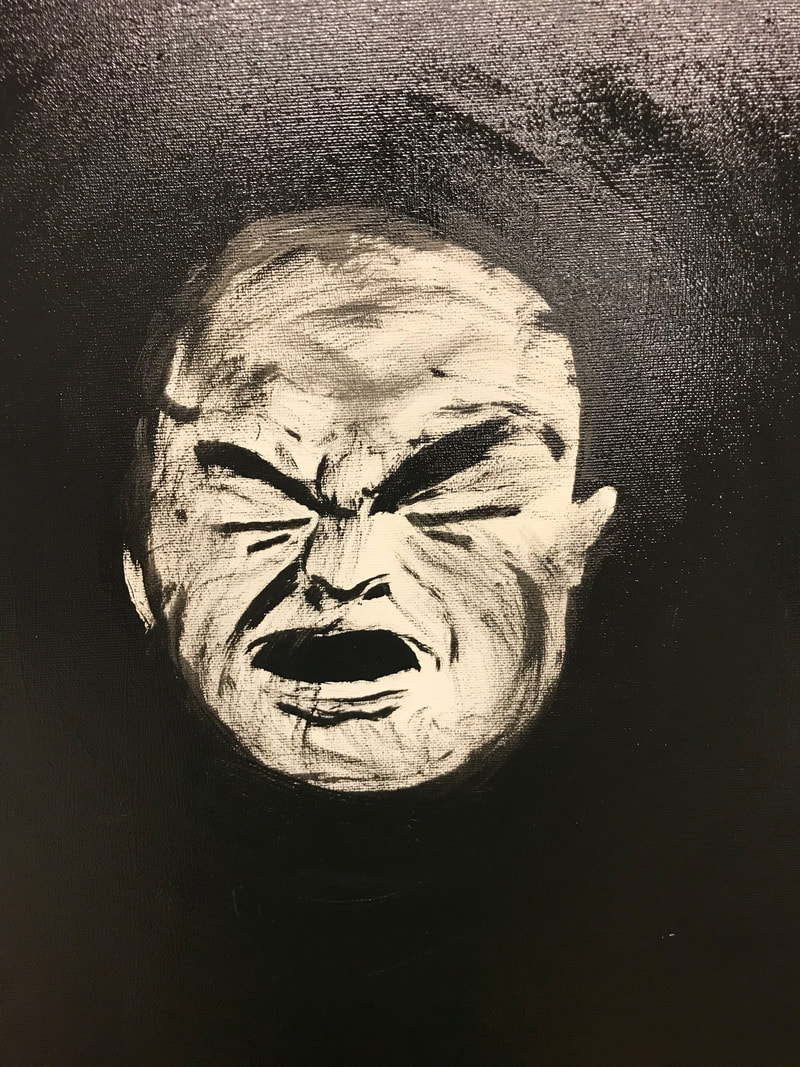 Pippy Firman has created art all his life. As a child, he played in the mud of the Horse River, creating dams and building bridges. From sticks and stones he progressed to stone masonry. He developed his painting through his work on wagons, carriages and steam engines. This is his first exhibition. The centrepiece is a series of portraits. Twenty faces looming from the shadows. Painted in fluid black brushstrokes. A whole range of emotions are expressed. Anguish. Contentment. Indifference. Torment. One portrait shows a man’s shocked face caught in the glow of his mobile phone. Some of the faces seem vaguely familiar: Oscar Wilde, Mussolini, Colm Tobín, Daithí Kavanagh.

Each portrait was painted with a particular emotion. Sometimes the artist would wait for hours for that emotion to surface. Pippy worked with the canvas on the floor of the exhibition space. His paint was a mix of oil pigment, linseed oil and turpentine. He painted quickly, taking ten to fifteen minutes for each piece. Mistakes were incorporated. In an early portrait, the paint was smudged by a cloth, creating a textured effect, which was used in subsequent paintings. Pippy started by depicting the eyes and the nose – what he describes as his cross – and the face emerged from there. He credits the lock down with giving him the time to produce the work. It is fitting that he would create so many characters during a time of isolation.

The lock down is suggested in other works. There is a large canvas wall hanging, called ‘Laughing and Crying Are Both Healers’ decorated with painted scenes and dried orange peels. (The orange peel motif is also visible as a stencil on the artist’s tools and toolbox.) The wall hanging contains lines of text: ‘Where is everybody? Is cancer a pandemic? Is suicide a pandemic?’ The orange peels themselves look viral. And citric acid is connected to fighting infection. This peel / viral motif is extended to sprayed canvas works where the hardened peels have been used as stencils. These works have an elegant graphic effect.

The ecological theme is carried over into the Renault 4 installation which features a detailed model of the car assembled in Smith’s factory in Wexford. The model is of a Renault GTL ‘Clan’ – a car intended for the Irish market. Pippy has placed the model on top of a block of hardened paint, which was taken from the accumulated deposits, which are still to be found on the remnants of the old factory floor. The block contains layers of the Renault colours – blue, red, and the orange for the P&T vans – all compressed together in swirling psychedelic patterns. Pippy’s work has been described as Outsider Art – a term that he embraces. He ascribes a therapeutic value to the work, in terms of addressing aspects of his own life – a process that is available to everyone. As one line of text on the wall hanging reads: ‘Our destiny is the same – let’s share the journey’.
​
Eamonn Colfer, July 2020

Solitary Refinement is currently in-situ in the Annexe gallery at Wexford Arts Centre. Due to COVID19 guidelines, gallery visitors are limited to two at a time. Please adhere to guideline and social distancing within the gallery space. For further information on the exhibition please contact, Wexford Arts Centre, Cornmarket, Wexford on +(0)53 91 23754 or email boxoffice@wexfordartscentre.ie.