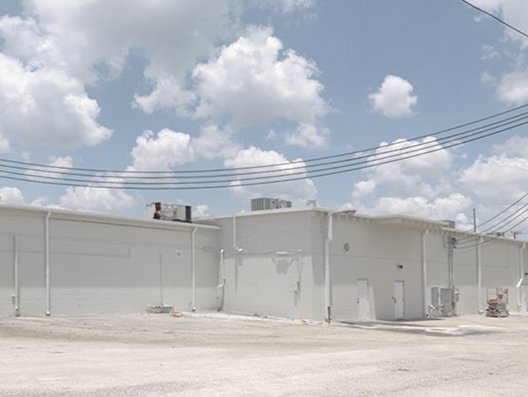 Paul Seawright’s new photographic works bring together the two major themes of his practice, contemporary cities and the representation of conflict. Volunteer extends his previous work, interrogating how contemporary conflict might be represented and discussed beyond the battlefield, without recourse to drama-centric imagery. He presents the landscape of the American city as a type of battlefield where the spectre of war in the Middle East is tangible on every street corner, college campus, town-square and front yard.

Volunteer is a survey of sorts, landscapes from today’s fraying, centre-less post 9-11 North American cities. Each photograph made at the location of a military recruiting station, where a different battle is being fought – to find young men and women to volunteer for service in Afghanistan. Starting in Texas, the highest recruiting state in the US, Seawright visited over 500 military recruitment offices in fourteen states including Georgia, Alabama, Louisiana, Tennessee, California and Mississippi. These new works comment not just on the ongoing war and the battle to recruit new soldiers, but the contemporary North American city, a landscape littered with thrift stores, gun dealerships, fast food outlets, nightclubs, car dealerships, strip malls and pawn shops. It is in these spaces on the margins of small towns and cities that the recruiters move amongst the unemployed, immigrants, ethnic minorities and students to find the volunteers of tomorrow.

Seawright often abstracts the locations he photographs, closing the frame and excluding the obviousness of the recruitment office from the image. His eye settles on the surface of buildings, the corners of car parks or adjacent premises, which are often abandoned. Volunteer rejects the colourful optimistic and clichéd representation of America and re-imagines it as achingly prosaic, a landscape and a country in turmoil.

Kerlin Gallery in association with MA Art in the Contemporary World at the NCAD, Dublin Presents: