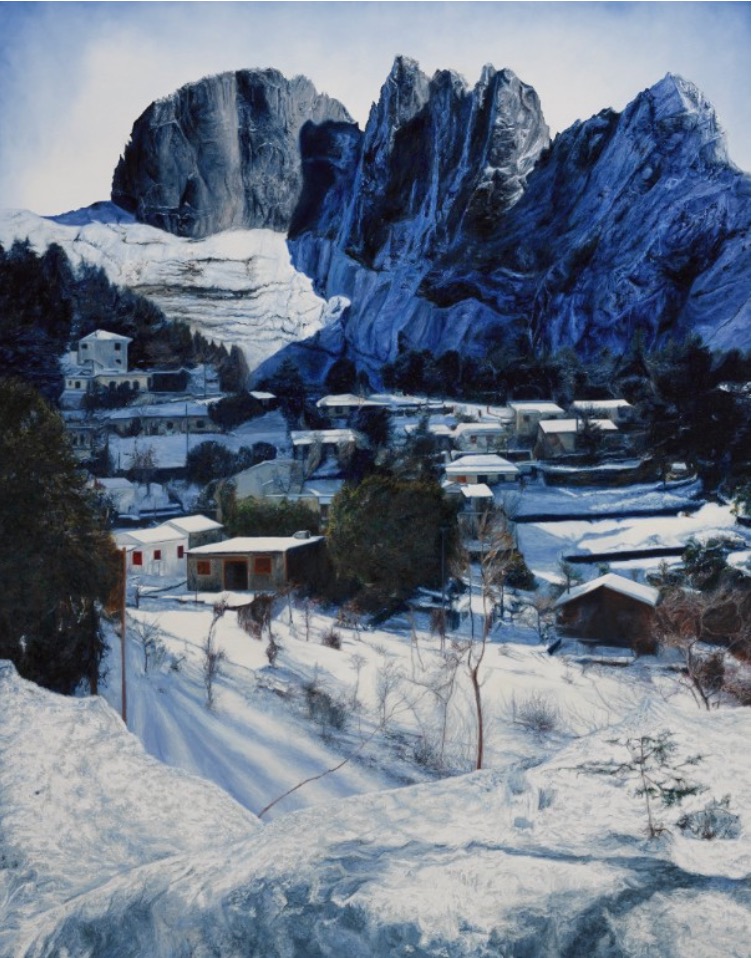 ‘Elysian Fields’ refers to an afterlife in Greek mythology, a place where the souls of gods and heroes as well as those associated with them would remain after death. Greece is a country dealing with mass displacement of people from war torn countries and though economically unstable, their contribution to aiding those who have crossed the Aegean Sea merited a nomination for the Nobel Peace Prize in 2016, dedicated to all Greek Islanders.

Within this exhibition, Paul McKinley considers modern conceptions of Greece as compared with its ancient history. His paintings feature aspects of Greek landscape; islands, mountains and cliff edges, often informed by compositions within art historical paintings. These landscapes are created from an amalgamation of various places and as such they are not one specific location, but rather an essence of place.

Within Elysian Fields, McKinley’s work charts the present-day representation of Greek landscape while the titles of the paintings subtly refer to parallels between heroes of ancient Greek mythology and the unwritten contemporary epic, fashioned from the plight of individuals in exile.

Paul McKinley (b 1973) Birmingham, England, graduated from Sheffield Hallam University in 1996. McKinley has exhibited widely in Ireland and abroad at art fairs such as Volta Basel in 2013. Recent solo exhibitions include Hanuman, Kevin Kavanagh, Dublin, Gacaca, RHA, Dublin 2014, Operation Turquoise, Kevin Kavanagh, Dublin, 2013 and Palisade, Third Space Gallery, Belfast, 2011. McKinley has also taken part in many group exhibitions including Periodical Review # 3, Pallas Projects, Dublin, 2013 and Interlude (Aspects of Irish landscape painting), The Douglas Hyde Gallery, Dublin, 2011. Mckinley was awarded the Credit Union Painting Prize in Claremorris Open 2015, an Arts Council Bursary in 2014 and The Nissan Art Project in 2007. His work is held in many important public collections including the OPW and AIB as well private collections in Ireland and across Europe.