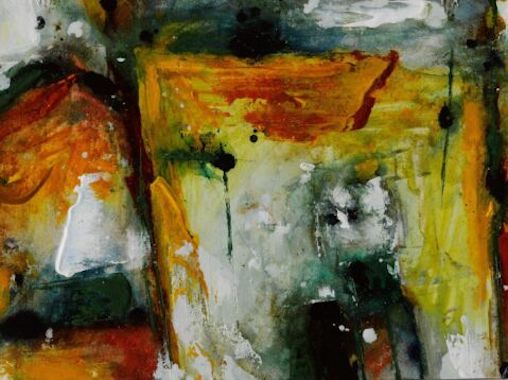 This new body of work from Bray-based artist MacAllister reflects a gradual shift from previous recurring themes (for example the Dublin lockout series, the Cable street series, the bog body series) to more purely abstract works inspired by the surfaces and materials themselves.

What brings all of the work together is an endeavour to get under the surface of any subject, be it abstract or semi-figurative and try to distil its essence through paint applied in as raw and direct a way as possible.

He explains, “I work best in an intuitive, improvisatory manner often from historic news footage, local and urban landscapes, other artworks, or really anything that triggers the imagination. I often use a range of industrial tools (scrapers, fillers, knives, screwdrivers) to find marks that reflects my response to a subject.

My work practise sometimes feels archaeological, digging down or scraping at layers to excavate an essence or theme. Ultimately, I hope the work speaks for itself and that I have managed to make something that has enough energy and strength to endure.”

Born in Ireland, Patrick MacAllister is a graduate in Fine Art from IADT.

He held his first solo exhibition at the Pantheon Gallery, Dublin in 1995, dubbed one of the shows of the year by Irish Times’ art critic Aidan Dunne.

He has exhibited in many group and solo exhibions at the European Parliament, the Royal Hibernian Academy, Boyle Arts Festival, West Cork Art Centre and Temple Bar Gallery.

He has received awards from the Arts Council and Ballinglen Arts Foundation, and his work is held in public and private collections in Ireland, Europe and the USA.