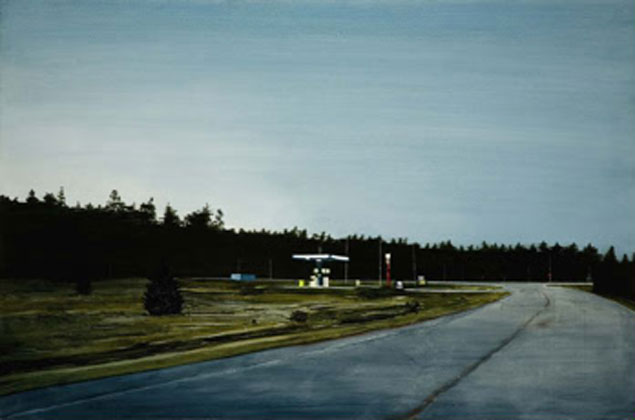 Oliver Comerford will present 30 works, featuring paintings from the past 16 years, in this mid-career retrospective. Comerford’s work has contributed significantly to the interpretation of contemporary landscape in Ireland. A representational painter, he presents a distinctive psychological space, often seen through the transient lens of a car window in motion. His images include outposts, remote or distant locations, coniferous woodlands and views from the edge of town. Comerford’s images are at once perfectly recognizable as the world we inhabit, and at the same time charged with subtext.

The paintings are, to a very significant degree, contemplative in mode – they show us spaces of suspense, but also of extraordinary, captivating stillness – and yet these unending journeys towards the edge of everyday life suggest an almost frenetic quest for calm: an unceasing and agitated striving, a hyperactive hankering for a setting, a sensation beyond the congested, contained conditions of urban existence. Given the back and forth between places and between ideas of place, and given the manner in which these images came into being (emerging from the movement between rapid, on-the-road photographic snapping and the slow, solitary graft of the painter’s studio) it is perhaps, ultimately, not those seductive points of rest, those lately pictured occasions of sublime stillness, but the enduring restlessness of Comerford’s painting practice that is most meaningful. Comerford’s art in this regard might be highly valued for the way that it alerts us to relation and analogy, to essential connections, rather than deluding us with dreams of escape. Here is an art that delights in the aura of places apart, but that quietly asserts the necessity of points between.

“Oliver Comerford’s work has been described both as social realism and romantic realism. Though seemingly paradoxical both can be true but only, but only with a revision of what we understand by these terms….Social realism is a term steeped with ideological determination. It refers not to the social reality but to the promotion of what that reality should be. Comerford’s realism attempts to capture the ‘unconscious mood’ of his era; that mood being determined by the many variants that constitute contemporary life, and their effect upon the tradition of landscape painting. Fintan O’Toole in the accompanying book, eloquently sites one of the most pertinent contributors to the formation of our life today being the constant moving between destinations, the ‘road’ itself becoming the subject. Comerford’s images derive from this experience, from the gas stations, highways and airports of our itinerant life.

And it is in these subjects painted in the light of the night or early morning that Comerford comes to the second assignation attached to him, a romantic realist. Historically, Romanticism as a genre depended on the awesomeness of nature overwhelming the human position…. Comerford’s romanticism is like a blue note of melancholy that derives from the loss of such order.

Overlying this discussion of subject, Oliver Comerford’s paintings crackle with the dynamics of the relationship between painting and photography. The work throughout is infused with subtext; Comerford’s images are as stark as they are complex.”

Currently living and working in Dublin, where he was born, Comerford studied at Chelsea College of Art and Design, London, Skowhegan School of Painting & Sculpture, Maine, USA, NCAD, Dublin and The Art Institute of Chicago. He has exhibited extensively since graduating in 1990, having had numerous solo exhibitions including the Kevin Kavanagh Gallery, Temple Bar Gallery and The Living Art Museum, Reykjavík. He has exhibited in many national and international group shows. His work is included in the collections of IMMA, Dublin City Gallery The Hugh Lane, Office of Public Works, among others. Private collections in Ireland, Britain, Australia and the US and He is currently shortlisted for the Sovereign European Art Prize being exhibited at the Barbican Centre, London.

A monograph on Oliver Comerford, published by the Royal Hibernian Academy, will be launched at the RHA Gallagher Gallery at 6 pm, 18 March 2010, to coincide with the opening theexhibition Oliver Comerford Painting 1994-2010. The 144-page publication contains essays by Fintan O’Toole, Declan Long and a Conversation between Oliver Comerford and Patrick T Murphy. There will be a special boxed limited edition of the book available, including a unique signed artist’s Monotype.

The monograph documents work from his 20-year career, and includes reproductions of paintings and other projects, DV stills, and unpublished snapshots from his personal archive offering an insight into his practice.