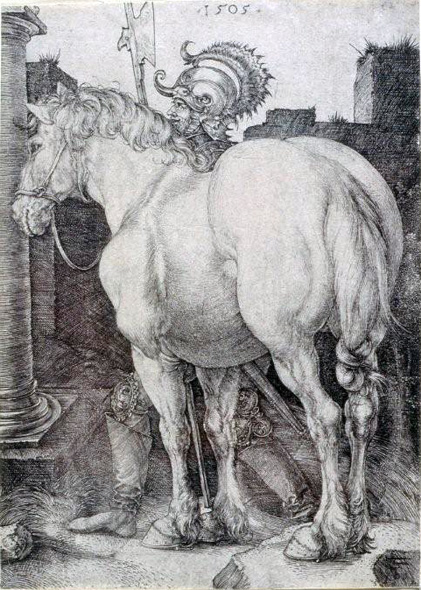 An exhibition of Old Master prints by many of the most famous artists ever to work with print-making opens to the public at the Irish Museum of Modern Art (IMMA) on Wednesday 23 March 2011. Works by Albrecht Dürer, Francisco de Goya, William Hogarth and Rembrandt van Rijn are all featured in Old Master Prints: The Madden Arnholz Collection, which is drawn from the Madden Arnholz Collection. It was donated to the Royal Hospital Kilmainham (RHK) in 1989 by Claire Madden, prior to the opening of the Museum in 1991. The exhibition is curated by Janet and John Banville.

The works included in the exhibition are by German, Flemish, Dutch and British artists, spanning the period between the beginning of the 16th century and the early 20th century. German printmakers of the Dürer period are well represented, but the most comprehensive part of the show is the remarkable group of prints by, and after, William Hogarth. While not complete, this is a valuable group, with several proofs of Hogarth’s single prints and sequences of ‘modern moral subjects’ in various states.

William Hogarth (1697-1764) was one of England’s most innovative and versatile artists. His influence was so great that the phrase “The Age of Hogarth” is now frequently used to describe the first half of the 18th century. Hogarth was renowned in particular for his use of satire to comment on the morals of his day. Many of the subjects he addressed, such as crime, political corruption, sexuality, patriotism and charity, gave his work a distinctively modern feel. His print series had a sequential character which could be said to anticipate the 20th century graphic and comic strip art and even film.

Also highlighted in the exhibition is the work of Albrecht Dürer (1471-1528). Born in Nuremberg, Germany, he was regarded as one of the greatest artists of the Northern Renaissance. He was also a painter, mathematician and theorist. The renowned humanist scholar Erasmus of Rotterdam paid his contemporary Dürer the highest compliment, saying that he achieved with his black and white prints what most artists could only express in colour. This is evident in the exhibition in Dürer’s engraving The Great Horse (1505), where the detail of shadow with line and cross-hatching are remarkable.

Another figure whose prints are just as well known as his paintings is Dutch artist Rembrandt van Rijn (1606-1669), considered one of the greatest painters and printmakers in European history. His etching The Great Jewish Bride (1635), featured in the show, glistens with light.

The Old Master prints were left to Claire Madden in 1982, after the death of her daughter Étain Madden-Arnholz at the age of forty-three. Étain had been married to Dr. Friedrich ‘Fritz’ Arnholz, to whom the Collection belonged, and who died in 1968. He was born in Berlin in 1897, into a wealthy merchant family and studied medicine. Graduating in 1924, he worked as a doctor in his native city until 1939 when, being Jewish, he was forced to flee Germany for Britain – his brother was murdered by the Nazis in Auschwitz. Moving to London, he served in the Royal Army Medical Corps during the Second World War and later set up a private practice in Fulham where he was to work for the rest of his life.

In London in the early 1960s, Arnholz met his future wife, Étain, who was some 30 years younger. She had been brought up in England but was born in Ireland to politically active parents, so she never lost her strong sense of herself as an Irish patriot. Étain was a student of philosophy, and Fritz, who had studied under Artur Schnabel, was a pianist of professional standard. Writing on the exhibition, John Banville says that Arnholz even bought a Bechstein grand piano with his reparation money from the post-war German government. The piano had to be hoisted through the first-floor window of his surgery to the amazement of his neighbours.

Banville goes on to say that Fritz was a lifelong collector of books, “how I envied his first editions of Rilke and Thomas Mann! – But his first love was for prints, especially those of Hogarth and Dürer. However he was no slave to reputation and some of the finest things among his collection are the works by unknown hands, and it is from these that we have mainly made our choices for the present exhibition.” The avid collector, Arnholz built up a significant collection both in Britain and through regular visits to the continent.

“This trove of European art, and craft— Dr Arnholz was as much a connoisseur of engraving skills as he was of artistic inspiration—is a testament to a remarkable man and his equally remarkable wife,” says Banville.

The Madden Arnholz Collection was generously donated by Claire Madden to the Royal Hospital in 1989 in memory of her daughter and son-in-law. It includes some 1,200 Old Master prints – the collection of engravings by Hogarth alone numbers over 500 works and is among the most comprehensive print collections in existence by the artist. The Collection also includes works donated in October 1998 following Claire Madden’s death. These include a large collection of books containing prints by the English printmaker Thomas Bewick and his family, as well as unusual versions of the prints on silk and one of Bewick’s printing blocks, of which will also be included in the exhibition.

The original Madden Arnholz Collection was first shown at the RHK in 1987 before it was donated and shown again at IMMA featuring the Hogarth prints in 2007. This exhibition consists of approximately 35 books from the Thomas Bewick collection and 80 Old Master prints.

The exhibition continues until 12 June 2011.