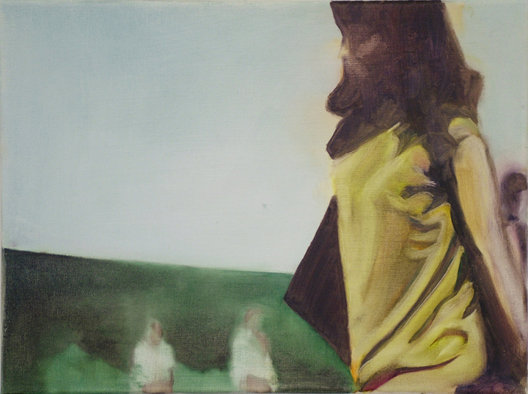 Nuala O’Sullivan’s interest in the aesthetic and culture of the 1950’s period and the friction between outward appearance and hidden restriction, come together in this current series of paintings. These works take inspiration from Super 8 movies and photographs from the period. Many thin layers of paint are used in the work to allow some of the light from the canvas to remain, reminiscent of movie images and old celluloid film. Found black and white photographs are recreated in colours associated with the 1950’s. The unknown people in these photographs allow for the imagining of their lives and the possibility for the artist and viewer to create their own back story for them.

Living and working in Limerick, Nuala O’Sullivan graduated from LSAD in 2006 with a BA (Hons.) Fine Art (Painting) and is currently researching her MA. She has exhibited extensively, with 2010 exhibitions at Enniskillen Arts Festival, Signal Art Centre, Bray, and Watergate Theatre, Kilkenny. Her work has also been shown at Limerick Printmakers, Dunamaise Open, and Eigse Carlow in 2009; and at the Royal Ulster Academy Show 2008, and Iontas 2007. Her work has been purchased by the University of Limerick and Limerick County Council.