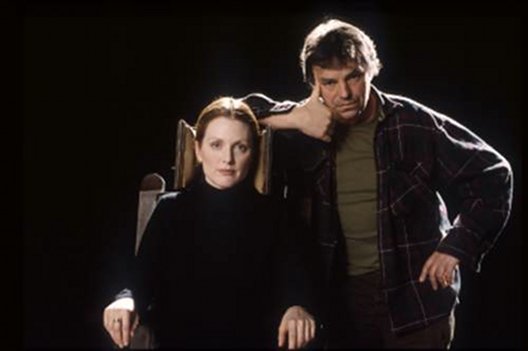 A unique film-based installation, Not I, directed by Neil Jordan and featuring the American actress Julianne Moore, opens to the public in the Irish Museum of Modern Arts temporary exhibition space in the Annex at the National Concert Hall site in Earlsfort Terrace on Friday 10 August 2012. The private view for Not I takes place on Thursday 9 August at 6.00pm, Neil Jordan will discuss his work in conversation with Dr Maeve Connolly before the opening at 5.00pm. As part of the ongoing IMMA Collection exhibition Time out of Mind, a film installation by Clodagh Emoe, Parados, 2009, is presented in the entrance space of the Annex.

Based on Samuel Beckett’s play Not I, 1972, the film installation presents an actress seated on a stage with just her mouth visible. The mouth then delivers a long monologue, a constant stream of consciousness. Beckett’s friend, and one of his favourite interpreters of his work, Billie Whitelaw recalled her performance of the original work: “I defy anyone to come up with a more intense theatrical experience than Samuel Beckett’s Not I. In otherwise complete darkness, a disembodied female mouth, known as Mouth, about eight feet above the stage, delivers a hyper-rapid stream of consciousness, a mixture of reminiscence and evasion, an existentially terrifying babble, hinting at deep trauma and extinction of self”.

Neil Jordan filmed his interpretation, which is 13 minutes in duration, from multiple angles in long, complete, 13-minute takes, since the piece only reveals itself through the pressure and physical demands of the uninterrupted performance of the text. Realising that each take had its own integrity Jordan developed his original film version into a multi-screen installation in which Moore’s mouth appears on six screens arranged in a circular configuration. For this installation while the artwork maintains its essentially circular configuration, the scale of the Annex, enables the use of especially large screens to create an enhanced, spatially immersive experience.

Jordan describes the process: “We had these enormous two-thousand foot film rolls and we filmed Julianne from different perspectives. They all were a different record of the same event…each angle was also the complete version…If I could pull them all into one synch and present each angle, simultaneously, to the viewer, the multiplicity with which cinema presents the world would be accessible to the viewer in a unique manner. Artists have long engaged themselves in a dialogue with the grammar and aesthetics of cinema, but the dialogue has rarely gone the other way. And Beckett’s luminous piece could be presented in a context that was neither cinema nor theatre, but something different”.

Maria Pramaggiore, Professor of Film Studies at North Carolina State University, has written about how, more generally in his work, Neil Jordan uses citation and repetition, borrowing and recycling, to critically engage with postmodernism’s challenge to authenticity and originality, and to address the complex relationship between cultural boundaries, art and violence. Jordan’s realisation of Not I acknowledges Beckett’s notion of a divided self. It emphasizes the multiplicity and dividedness of postmodern identity and the capacity of cinema to represent that fragmentation. The individual cannot resolve herself into a single image or a valid sentence because the forces of instability are too great.

Not I is part of a unique and ambitious project, Beckett on Film, the brain-child of Michael Colgan, Director of the Gate Theatre, in which each of Becketts’s 19 plays were committed to film in 2000-2001. Each had a different film director, charged with adapting the demands of Beckett’s plays to film while adhering to his exacting stage directions. Not I was adapted for film by Neil Jordan as part of the project and donated to IMMA in 2001.

Born in 1950 in Sligo, Neil Jordan began his career as a writer. His first book of stories, Night In Tunisia (1976) won the Guardian Fiction prize. Since then he has published five novels, The Past (1979), The Dream Of A Beast (1983), Sunrise With Seamonster (1994), and Shade (2005). His most recent novel, Mistaken was published in early 2011. Neil Jordan’s film career began with the role of creative consultant on John Boorman’s Excalibur in 1981. In 1982 Jordan wrote and directed his first feature film Angel. Since then he has written, directed and produced more than fifteen films, including Company of Wolves (1984), Mona Lisa (1986), The Crying Game (1992), Interview With The Vampire (1994), Michael Collins (1995), The Butcher Boy (1996), The End Of The Affair (1999), The Good Thief (2002), Breakfast On Pluto (2005) and Ondine (2009). His films have been honoured with numerous awards worldwide, including an Oscar, BAFTAs, Golden Globes, A Golden Lion from The Venice Film Festival and a Silver Bear from Berlin. He has been awarded five honorary doctorates and in 1996 he was appointed Officer of the French Ordres des Artes et des Lettres. Neil Jordan has more recently written, directed and produced the television series The Borgias, with Octagon Films, and Showtime. His latest film Byzantium is currently in post-production.

As part of the ongoing IMMA Collection exhibition Time out of Mind, a film installation by Irish artist Clodagh Emoe, Parados, 2009, is presented in the entrance space of the Annex. Emoe works within this transitional area of the building to create an atmospheric installation where sight, sound and heady scent combine. The term liminality plays a significant part in informing Emoe’s work. Liminality is derived from the Latin limen, meaning threshold, and foregrounds some kind of departure or crossing over of boundaries. Liminality is understood in ritual theory as a temporary symbolic suspension of normative structures that become mobilised through staging and forms of gathering or collective assembly. Emoe seeks to evoke a similar ‘threshold’ state in her work by using strategies associated with ritual. In aligning the space of art with the symbolic realm of ritual, Emoe’s works seek to prompt a consideration of art as a moment of encounter that, like ritual, can potentialise new forms of thought and experience.

Parados is drawn from Emoe’s larger project Cult of Engagement in which Emoe deals with the dramatic tradition of Tragedy. Parados is the term used for the entrance song of the chorus introducing the event that is about to take place. The processional chorus in Emoe’s film is, however, silent – an absence suggesting the role of the viewer within this dynamic to imagine what unfolds. Cult of Engagement, 2009, was commissioned by the Project Arts Centre and donated to IMMA in 2010.

At 5.00pm on Thursday 9 August Neil Jordan will discuss his work in conversation with Dr Maeve Connolly, in the Lecture Room at the NCH building. Admission is free but booking online is essential at www.imma.ie/talksandlectures

Not I: An installation by Neil Jordan and Parados by Clodagh Emoe continue until 9 September 2012.