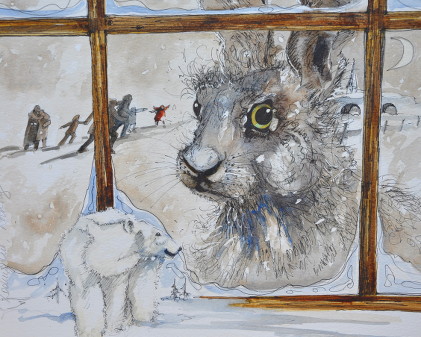 In her career as professional artist, Meath-based Noreen Walshe Noreen has explored many themes, styles and ideas within her painting.

‘Windows’ is a collection of large and small frames of observation and response. It looks outside at the rich imagery afforded by the natural world both in the immediate environment like Co. Meath, the West and in places further afield such as Churchill Manitoba, the world capital of the Polar Bear. At the same time it looks in at the overwhelming need to paint and to respond to everything ‘out there’ within the restrictions of materials, space, time and practicality. For the artist there is a need beyond analysis and reason that compels the creative process.

On reflection the artist identifies with the bear as the Soul and the hare as the Personality and not without their elements of fun. There are watchers too in the form of other animals and birds. Rupert Bear (The Daily Mail) appears in two pieces that bring us back into childhood and the world of fantasy. One of these works ‘Homage to Rupert 1’ is based on a story by the artist that was written and broadcast on Lyric FM the Quiet Quarter 2008. (Across the Christmas Sky)

Part of the exhibition is a series of drawings/watercolours in progress, which will illustrate the book she has written with a hare as the main character. On the opening night she will read a short extract from this oeuvre ‘Mad Hare Daze’

All in all this promises to be a visually interesting show and ultimately may prompt the viewer to wonder where lies their sense of joy and fun which might surpass ordinary concerns of survival in these times of stress and economic gravity.

Noreen Walshe acknowledges the support of Andy Fisher, British Wildlife Photographer, The Tyrone Guthrie Centre, Co. Monaghan and the Irish College, Paris without whom the exhibition ‘Windows’ would not have developed so joyously!