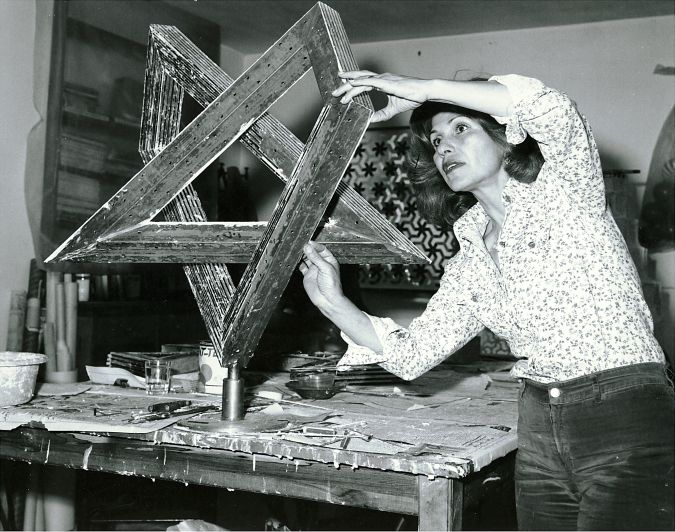 IMMA presents Sunset, Sunrise, a major retrospective of the work of prominent Iranian artist Monir Shahroudy Farmanfarmaian (b.1924, Qazvin, Iran). Now in her mid-nineties, this exhibition marks the first solo exhibition of Farmanfarmaian’s work in Ireland. Sunset, Sunrise offers a rare opportunity to rediscover the breathtakingly kaleidoscopic nature of Farmanfarmaian’s 1970s sculpture and to encounter drawings, jewellery and previous unseen embroidery and collages from the 1980s, alongside new pen and ink drawings, fresh from the artist’s studio in Iran. Over 70 works are on display, encompassing a multitude of artistic genres which inform the artist’s practice.

Farmanfarmaian was a key figure of the New York art scene and Sunset, Sunrise reflects a life lived between two cultures, East and West. Between 1945 and 1957 she lived in New York City and it was here that she worked alongside many iconic contemporary American artists including Jackson Pollock, Frank Stella, Louise Nevelson and Andy Warhol, all of whom had an influence on her work. Her early involvement with graphic design and experimental modern abstraction in New York gave way to a period of intense research into traditional craftsmanship and folk art in Iran’s more remote regions. Western avant-garde principles were maintained by the artist while she delved into Persian mysticism and simultaneously evoked the socio-political Islamic landscape as well as the easily recognisable geometry of Iran’s artistic and architectural heritage. Embedded in this collision of cultures, Farmanfarmaian navigated a path to her own distinct form of rich geometric abstraction.

Farmanfarmaian returned to Iran in 1957. She was abroad when the Islamic, or Iranian Revolution of 1979 broke out, effectively making her an exile until 1992. Returning to Iran in 2004 she is now firmly re-established in her native country and is considered one of the most important Iranian artists working today with the opening of The Monir Museum in 2017 – the first Museum in Iran dedicated to a female artist.

Sunset, Sunrise investigates the abundance and mystery of nature, the universe and our place within it. The exhibition includes key works Sunrise (2015) and Sunset (2015), both created using mirror and reverse-glass painting on plaster and wood. Other works, such as Untitled (2012) and Untitled 4 (2016), are shown here for the first time. These works incorporate highly reflective materials such as mirror and glitter on paper which are in line with the artist’s use of luxurious textures such as pearls, crystals, beads and gold leaf within her wider practice. Also showing is the intimate documentary film, Monir, 2015, chronicling the life and work of the artist, directed by Bahman Kiarostami and produced by Leyla Fakhr.

A fully illustrated publication accompanies the exhibition, focusing on architecture, poetry and a fresh re-evaluation of Monir Shahroudy Farmanfarmaian’s practice. Included in the publication are Farmanfarmaian’s favourite poems joined by newly commissioned texts by Rahel Aima, Dr Tina Kinsella, Caoimhín Mac Giolla Léith, Murtaza Vali, Rachel Thomas and Hoor Al Qasimi, as well as extracts from Hans Ulrich Obrist’s previously published interviews. The publication is co-published by IMMA and Sharjah Art Foundation. The publication will be available to purchase at the IMMA Shop.

A new Limited Edition print of the work of Monir Shahroudy Farmanfarmaian, titled Sunrise, will be available to purchase at the IMMA Shop.

Online booking will open from mid-July 2018.

Born in Qazvin, Iran in 1924, Monir’s distinguished career has spanned more than six decades. The artist attended the Fine Arts College of Tehran before becoming one of the ﬁrst Iranian students to study in the United States after World War II. She graduated from Parsons School of Design in 1949 and then became a Member of the New York Art Students’ League (1950-53). Engulfed in the epicenter of the modern art world, it was here that she worked alongside many iconic contemporary American artists including Jackson Pollock, Frank Stella, Louise Nevelson and Andy Warhol, all who had an inﬂuence on her work.

She has participated in four editions of the Venice Biennale, where she was awarded the Gold Medal in 1958, 1964 and 1966. She also participated in the 6th Asia Pacific Triennial at Queensland Art Gallery, Australia, and at Liquid City, the 2nd Brugge Triennial in Brugge, Belgium (2018). Monir’s work is housed in several major public collections including the Museum of Contemporary Art, Chicago; The Solomon R. Guggenheim Museum, New York; The Metropolitan Museum, New York; the Victoria and Albert Museum’s Jameel Collection, London; The Queensland Art Gallery, Australia; The Tehran Museum of Contemporary Art, Iran; Swisscorp Bank,Geneva, Switzerland; The Sharjah Art Foundation; and the School of Law at Columbia University, America. Monir lives and works in Tehran.

A number of events will accompany this exhibition. Join the IMMA Talks Mailing List to have event notifications and announcements sent to your email.