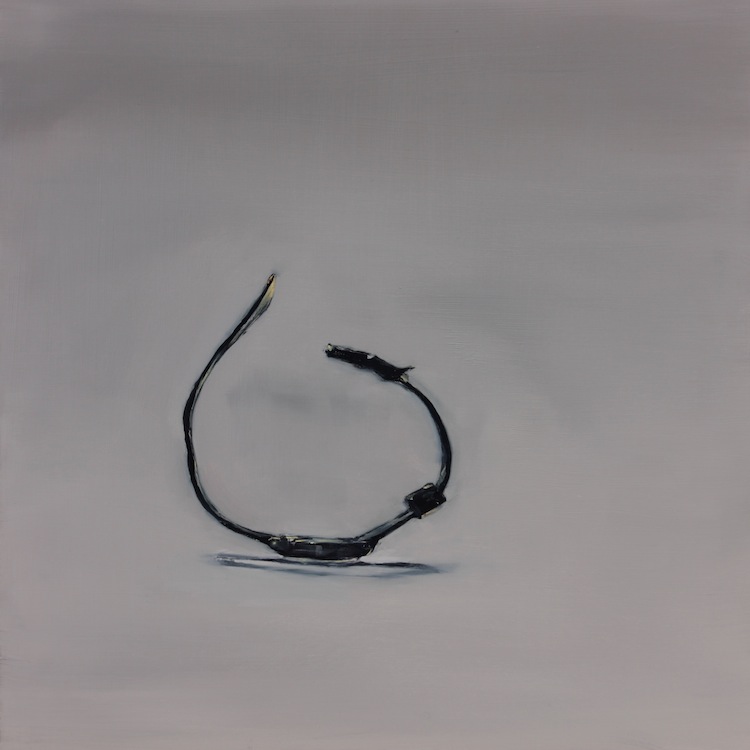 For Douthit, painting begins in a place of order, mixing colors based on sight, placing objects in a clear and certain place. Working from life, the process unfolds, leading to images that hinge between the poetics of paint, and the specifics of the object. The process reaches an end when she is unable to truthfully put down another mark that relates to the object, or the new space it exists in.

Douthit’s deliberate positioning of the object into a unique view aids her attention and the visual relationship between artist and object. By increasing the size of the objects, there is more surface area to explore with paint. In isolation the quiddity of the figure comes into play; however, one thing is always certain – light is falling on something. The square opens or closes evenly, allowing the object and its own aesthetic attributes to be the focus rather than the figures relation to a longer or shorter edge. Existing in a field of grey the figures specific visual qualities are more evident, and permits a space to question an objects physical presence, as well as its emotional and mimetic power.

Her practice gains strength from literary sources such as Seamus Heaney and Lydia Davis, for their inventiveness as well as economic use of language. She is impacted by the work of Morandi, with his ability to bind the simple with the complex. Crucially, paint allows the artist the opportunity to explain the failure, success, and assumption of sight. Marks become more important than the what or the where, as edges become blurred and light objects hover over their shadow.

Born 1986 in North Dakota, Douthit received a BFAfrom University of North Dakota, 2009, a Post Bac Certificate from Museum of Fine Arts, Boston, 2011 and a MFA from Burren College of Art, Ballyvaughan, Ireland in 2014.

Douthit’s work has been featured in the 2013 MFA edition of New American Paintings, MFA Boston Medal Award Auction, and RDS Student Art Awards exhibition. Exhibiting in the 2013 RHA Annual Exhibition she received the Hennessy Craig Award. Douthit has been featured in Saatchi Art online, as well as the Saatchi Gallery in London. Upon Completing her MFA Douthit was nominated for the New Sensation Prize through Saatchi Art. Her work is owned by public and private collections. Douthit currently resides in Callan, as the Tony O’Malley resident artist.