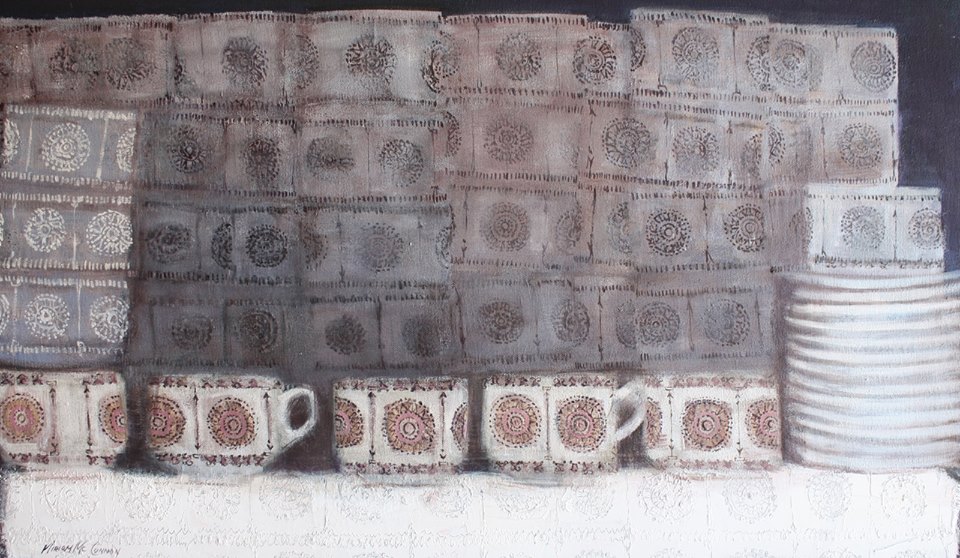 Presented by the Olivier Cornet Gallery

This exhibition gathers under the same roof, that of the Belltable in Limerick, the work of two artists represented by the Olivier Cornet Gallery in Dublin, two artists interested in the narratives behind domestic structures and household objects.

With his series of paintings of abandoned fireplaces in derelict houses on the West coast of Ireland, artist Eoin Mac Lochlainn reflects on Irish emigration in the 21st century. It was inspired by a poem by Cathal Ó Searcaigh entitled: “Na Bailte Bánaithe”, a poem about how spirits haunt the land, long after the people who lived there have gone. The artist spent some time in the Donegal Gaeltacht during the last few years, searching for and exploring the old homesteads that were mentioned in the poem.

‘’I was reminded of how central the fireplace was to the home, how people used to keep the fire going throughout the night and throughout the year, and how it really was the ‘hearth’ of the home. If people were moving home, they would take a lighting sod of turf with them from the old house to begin the fire in the new house, so as not to break the cycle. Seeing these abandoned fireplaces, each with its own distinctive personality, was quite distressing and I undertook the series of paintings as a sort of requiem for those who had gone, a commemoration of the diaspora.’’

Miriam McConnon‘s most recent paintings and drawings pose questions about the influence that domestic objects have over our sense of who we are and how we live.

When does an object exist for us, become a part of our lives? When we use it every day, break it, repair it, hold it, wash it? Then does it become our object or at the very least an object that we relate to? How relevant are they to our individual stories? Do these objects become part of the pattern of our life?  Do they reveal a hint of the intimate story that is our life?

In her current body of work Miriam speaks to each individual bringing them on a journey of contemplation about their own everyday pattern of life.

The cup is the most prominent object in the series of works presented here. A small vessel that we hold, wash and touch with our mouths several times a day. It is an intimate relationship. In her new paintings we look at multiples of cups expanding across the canvas, creating structures. Miriam uses the cups to create landscapes that resemble walls or partitions. These walls can provide security but also keep others outside. The pattern of the cups is repeated across the canvas echoing the repetition of domestic chores and the domestic routine. Does the intensity of this repetition make us feel secure, does it smother us, does it preserve memories and moments? Maybe it does all of these things.

Miriam is compelled to paint these objects and repeat the patterns to create structures with them. These are her domestic landscapes. She poses questions through the paintings about the intensity of the domestic rhythm of life and invites the viewer to answer them or at least contemplate them.

Some of the images of the paintings featuring in the show can be seen here •  For more information on each artist: Miriam McConnon; Eoin Mac Lochlainn

Image: Miriam McConnon: 'Domestic landscape III', oil on canvas, 45 x 75cm
Saturday 11 March – Friday 7 April 2017
The Belltable
69 O'Connell Street
Limerick
Telephone: +353 61 319866
info@belltable.ie
www.belltable.ie
Admission / price: As per event
Opening hours at the Belltable: Mon-Sat 12 noon to 5.30pm; the exhibition can also be seen in the evenings when shows are on: from 7pm to 9:30pm: every Monday & on March 16, March 30 & April 4
Associated sites
Design: iCulture • Privacy and cookies
Tweets by dnoting
other sites designed or
assisted by iCulture