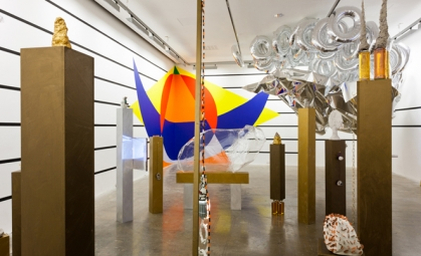 Panto Collapsar will fill the gallery with a mass of silver balloons to create a floating ceiling. With an array of theatrically staged sculptures, totem-like structures and a dramatic wall painting, the exhibition is a continuation of Dwyer’s interests in the occult, the natural world, science and maths, as well as a response to Ireland, its heritage and culture.

Dwyer is an expert at harnessing the essential energy matter that surrounds objects. By bringing artefacts and materials together in a group formation, it is as though she’s asking them to speak together of the future and of the unknown. She reveals a sense of togetherness and communication amongst the individual pieces, setting them up as though in conversation with each other, bringing the audience into the presence of something mystical.