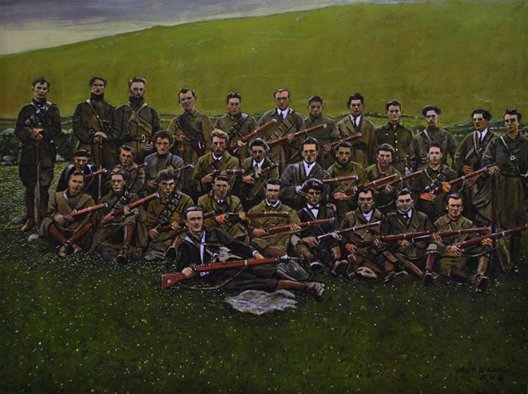 “The War of Independence is the world of Mick O’Dea’s new, challenging and brave exhibition. His flensed vision forces us to stop and look hard again at the shop-worn iconography of the War of Independence. In his meticulously painterly way, O’Dea, working from historic photographs, brings back to vivid life the figures of this period in all their flawed and slightly sinister humanity. These are gunmen of various hues, living with and on the edge of violence, taut even when relaxed, and coiled to unleash or accept death in an instant. The Black and Tans and Auxies carry themselves knowingly, presenting a glamorous, swaggering or louche version of themselves to the camera. They court the camera and hold our gaze in O’Dea’s brilliant re-imaginings: the living men stare back at us from these large paintings, dominating us as they once thought to dominate a country. The artist reveals their self-consciousness, their acceptance of the role they chose to play, their theatricality, their stagings of their own aggressive version of masculinity. These are modern men, not at all shy or reserved in front of a camera. By contrast the men on the Mayo Flying Column appear more opaque, shielding us from access to their inner sensibilities.

O’Dea shows us the gleam of the boots, the furl of a flag, the cut of a coat, the way the hair falls across a broad brow. These are carefully wrought paintings, worked for a long time to achieve a high degree of finish. In the many groups, each figure is carefully individuated and after we look at a series of these paintings, we feel that we know these men intimately, that we would recognise them across a crowded street by their stance, the way they wear their clothes, their smiles. And always there is the overt presence of violence. Guns and holsters are everywhere: Collins’ bodyguard Joe O’Reilly, has one gloved hand and one bare, the more quickly to reach for the gun in his pocket. The gleaming boots draw the eye, and a homoerotic charge passes through these knowing masculine companies. The artist observes all and reveals all, the quality of the painting opening these lives again, as we experience these men not as cardboard cut-outs, but as fully formed individuals, dense with a vivid particularity, released back from their frozen static photographs into the living stream of history. Their sheer quality forces the observer to engage with them not as abstract and remote figures, but as real people in a real time and place. The masterly attention to establishing the backdrops – leaves on the bushes, the rise and fall of a pavement, the angularity of a bench – situates these men in a fully realised material world, and we admire the classical quality of the painting in these bravura passages.

As we start on ‘a decade of commemorations’, as we as a country engage again with 1916 and the War of Independence, Mick O’Dea has placed us in his debt. This is an artist coming into the full expression of his considerable powers.”