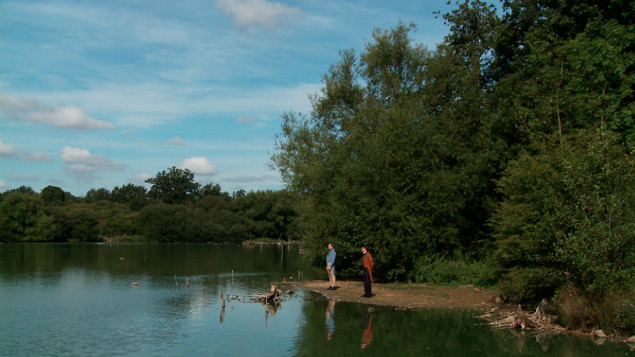 Crawford Art Gallery is delighted to present Her Fanciful Digression by artist and filmmaker Michelle Deignan, as part of its ongoing screening series by Irish and international artists.

Her Fanciful Digression (2012) is set in a ubiquitous landed estate in England, where lingering shots of the ‘natural’ landscaped gardens offer a sympathetic background to the narration of an imagined meeting between Irish feminist Anna Doyle Wheeler (c.1785‐1848) [i] and her contemporary, English landscape painter John Constable (1776‐1837) [ii].

Echoing Doyle Wheeler’s and Constable’s meanderings through their host’s parkland, the film follows two male apprentice romantics, adhering to the tenet of which Constable proffered his students to observe, sense and draw with one’s memory of the natural world around them. Michelle Deignan’s documentary form recounts briefly the events that contribute to Doyle and Constable’s meeting, through Doyle’s encounters with leading theorists, philosophers and artists, and her remarkable life of promoting feminist theory and equal rights for women through her travels between Dublin, London and Paris in the early nineteenth century. Deignan’s astute photography and editing enables a playful skewing of the anticipation of the narrative and visual motifs whilst revealing occurrences behind their own production. Smoothly jolting ‐ from spring to autumn, from the third person to the first, from fact to fiction ‐ the film questions one’s perception and memory.

The narrative in Her Fanciful Digressions questions the supposed singularity of artists working within the Romantic tradition. Deignan’s four protagonists place an emphasis upon the multi‐disciplinary relationships at this time, which led to creating new artistic and political changes across Europe and this collective creativity still resonates in the contemporary.

Michelle Deignan will discuss Her Fanciful Digression and her practice.

Crawford Screening Series will continue with:

[i] Born in Tipperary and later moving to London and Paris, Anna Doyle Wheeler collaborated with William Thompson to write Appeal of One Half of the Human Race, Women, Against the Pretensions of the Other Half, Men, to Retain them in Political, and Hence in Civil and Domestic, Slavery (1825). It was the first major statement on women’s right to political equality written in the

[ii] Rejecting the accepted hierarchy of genres, which ranked idealised landscapes that told historical or mythological tales above

views observed in nature, John Constable’s precept “I should paint my own places best” guided his career, as he developed a

unique style combining objective studies of nature with a deeply personal vision of his surrounding countryside in England.