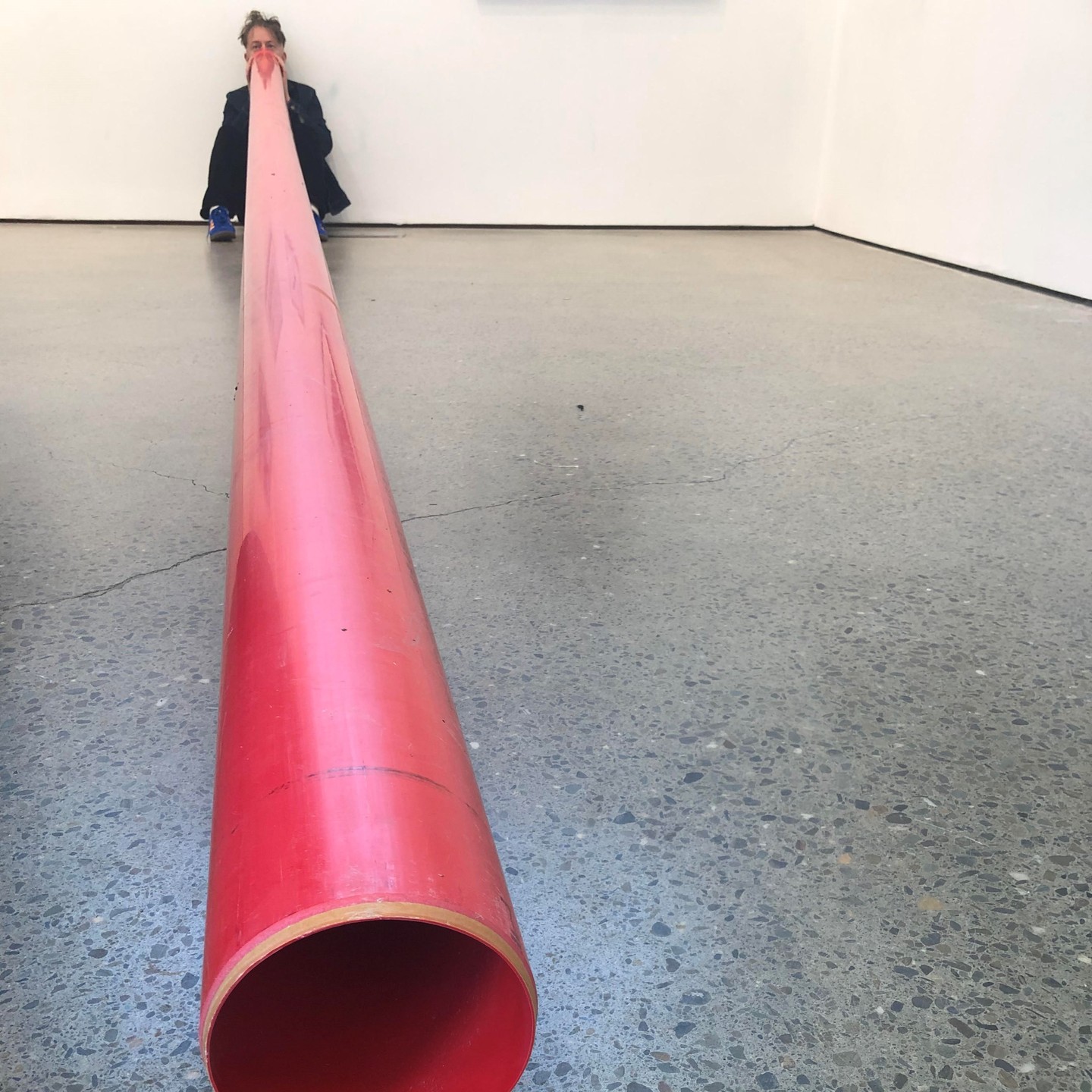 To mark the opening of System Interference at Uillinn, writer and researcher Caroline Bassett and artist Micheál O’Connell will present Stupidity, Dissent and the Machine, a gallery conversation, at 2pm on Saturday 17 September.

Micheál O’Connell a.k.a. Mocksim was awarded one of The Arts Council / An Chomhairle Ealaíon’s prestigious Commissions Awards to produce new work for this exhibition. His practice involves ‘interference’ with everyday functional processes and technologies including the computational network, but also the heavier and traditional machineries. In keeping with the approach, during a series of residencies at Uillinn, he has been looking unorthodoxly at the ways in which landscape is used.

The exhibition is mainly a mashup of three elements relating to aspects of this use: the increasing presence of wind farms, the road system with its traffic flows which have crept up over a century, as well as observations on golf and the unusual sport of road bowling (played almost exclusively in counties Cork and Armagh).

Substantial sculptural pieces include an arrangement of the typical pipes used for sewerage, electricity, water etc. which are embedded underneath roads, large inflatable wind turbine models and a toy wind farm with golf balls distributed about the battery powered turbines.

O’Connell’s practice is characterised by processes involving tricksterism, misuse, comedic interactions, ethical hacking and deliberate misunderstandings of the everyday. A number of works arose out of the thought experiment that golf courses could be converted into wind farms, and the game adjusted to suit (working title Turbogolf). For some years he has been posting proposals for this new game on TripAdvisor (in place of reviews) together with mockup images. In many cases the proposals have remained for golf resorts in Ireland and beyond, including Trump International in Dubai, and a resort found in what used to be part of the Amazon rain forest.

Part of his work in Skibbereen has been to interrogate the Uillinn building itself and the area around, via a series of exercises in order to find ready-made work and include site-specific elements. Many of these actions, along with other insights into the process, are given attention in updates Micheál provided during the series of residencies: uillinn-mocksim.blogspot.com

There is a serious dimension to the work in terms of environmental concerns, the democracy or lack of it in decision making, what is given priority and what is not. A number of other works, printed material, sound recordings and Michael’s signature ‘simupoems’ – short moving image pieces which play in loop mode – are included as well as interactive elements and ways in which the exhibition might, through a number of planned events, have reach beyond the institution.

The exhibition is accompanied by substantial text, in book form, entitled Art Misuse and Technology: Micheál O’Connell’s ‘System Interference’ by Professor of Art and Aesthetics, writer and philosopher, John Roberts. The opening event will also be a book launch then and John Roberts will be joining us in person.

System Interference will tour to Wexford Arts Centre and Highlanes Gallery, Drogheda in 2023/24 with the support of an Arts Council / An Chomhairle Ealaíon Touring and Dissemination of Work Award.

Micheál O’Connell’s practice employs strategies – often carried out under the moniker Mocksim – of ‘interference’ with everyday functional processes, including misuse, misunderstanding, lampooning and tinkering with technological systems. Work has been shown in project spaces, established locations and, long before the Covid-19 pandemic, using available and invented systems for streaming and distribution. An early project, Contra-Invention, had been selected for Les Rencontres Internationales de la Photographie d’Arles, was later part of From Here On at Arts Santa Mónica, Barcelona, the catalogue was included in Martin Parr’s Best Books and more. Since completing a practice-led PhD in 2016, entitled Art as Artificial Stupidity, he has been actively intervening again, both independently and as part of collectives.

Caroline Bassett is Professor of Digital Humanities at Cambridge where she leads Cambridge Digital Humanities (CDH), a research centre exploring digital culture and digital methods. She researches, teaches, and writes about digital media, computational humanities, AI and the transformation of knowledge cultures, technology and social power, science fiction, utopian thinking, critical theories of the digital, and gender. What runs through all this is an engagement with media technology and the political. Her publications include The ARC and the Machine: Narrative and new media and Furious, a co-authored monograph on feminism, gender and digital worlds. She has recently been exploring AI writing in relation to claims for machine creativity. Her latest book Anti-Computing, which explores histories of resistance to computerized cultures, was published by Manchester University Press in 2022.