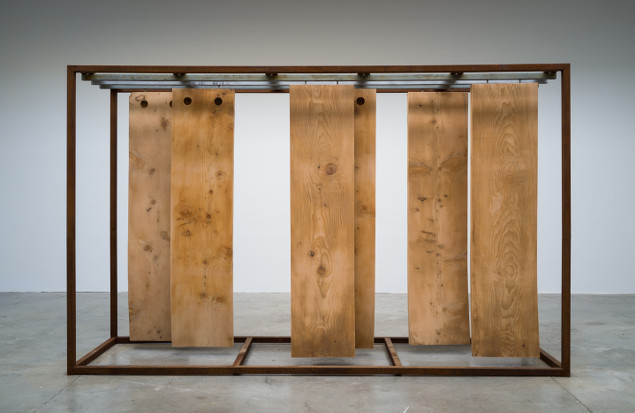 Limerick City Gallery of Art is delighted to present New Work by one of Ireland’s most eminent artists, Michael Warren, in its dramatic start to 2014 Limerick City of Culture.

Michael Warren has created a truly radical and unprecedented body of work; that will disconcert and raise questions about long-held concepts in contemporary sculpture.

These recent sculptures of Warren’s constitute a remarkable creative leap: a shift into new possibilities of sculptural structure, the invention of unprecedented articulations of forms and configurations that borrow with extraordinary insouciance and elegant economy from other arts……

This is a sculpture that reaches back beyond both the informal play and arbitrary ahistorical referencing of the postmodern and the formalist rigours of purist high modernism to forms and presentations of other, older cultures.

It does this with scrupulous intellectual principle, and with a characteristically unorthodox aesthetic economy. Informed by a richly historical imagination, these sculptures of Warren’s enter the ‘highly complex relationships’ of Focillon’s ‘life of forms’; their ‘free and exalted dreaming’ partakes of the never-ending recurrence of artistic imagery and structure that Fritz Saxl called ‘a heritage of images.’ Mel Gooding

(extract from Michael Warren: A New Body of Work.)

This is an opportunity for the Limerick Public to host one of the most important artistic statements internationally. Michael Warren also acknowledges Limerick’s collection by selecting from the permanent collection in a deft tribute to Limerick and to materiality, including works by John Shinnors, Grace Henry, William Leech among others.