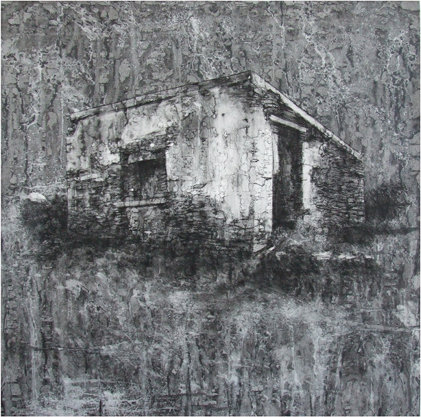 Wann’s work is specifically drawing-based, and juxtaposes arbitrary or transient images of cleared landscape, with more thought provoking depictions of the dereliction of habitation. The work is as much about a process of mark-making as it is about representing a seemingly neglected landscape.

“Michael Wann’s fragile ephemeral images of derelict buildings depict a rare transient quality which is both harrowing and beautiful, evoking themes of memory, neglect and loss.

Despite, or because of his expert skill as a draughtsman, it is within the versatility of the medium (charcoal and water on fine grain canvas) that there exists a delicate balance, between an imperfection of process and an exacting act of observation, adding a poignant vulnerability to this new body of work.”