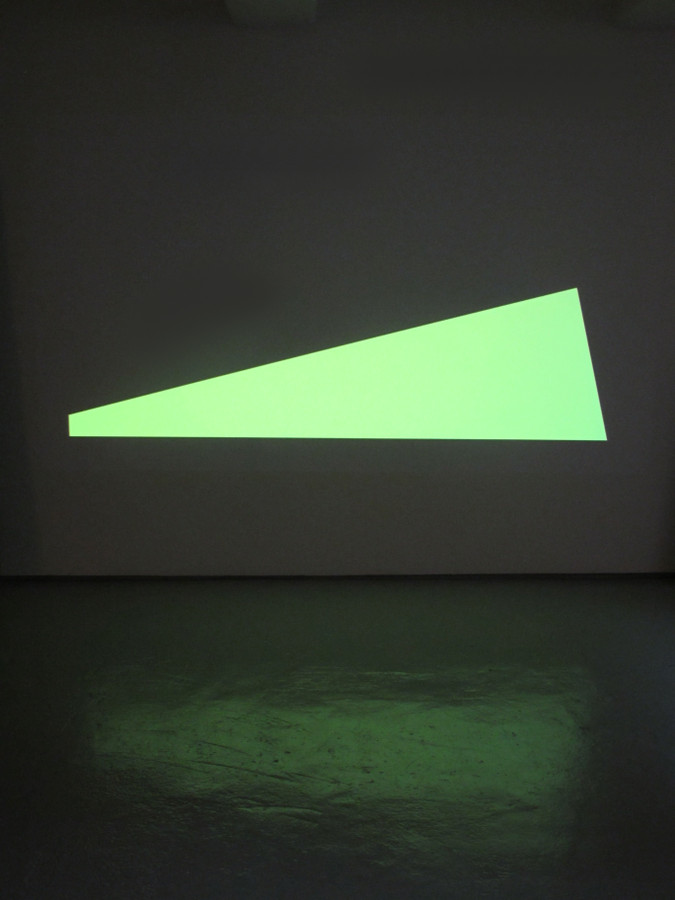 The Butler Gallery is honoured to present a major exhibition by the internationally renowned visual artist, filmmaker and musician Michael Snow.

The Viewing of Six New Works (2012) draws on Snow’s past work of examining the nature of perception and the physical relationship of the artwork to the viewer. Six projectors cast richly coloured monochrome geometries onto white walls. The rectangular shape elongates, rotates, and contorts into shapes that include trapezoid and rhombus. These transmuting light projections simulate the varying ways a person might look at a rectangular wall-mounted artwork by digitally mimicking and mirroring the movement of the eyes. There is a notable sense of play and experimentation in the way Snow relates what he is thinking in this conceptually pristine yet beautiful installation. “The work is an attempt to present only the movements of perception, not perception itself. The art of looking.” – Michael Snow

Michael Snow is a visual artist, filmmaker and musician. He first exhibited in New York in the 1960s and became internationally recognized for pioneering avant-garde cinema with the film Wavelength (1967). His work is represented in private and public collections worldwide including the Museum of Modern Art, New York; the Hirshhorn Museum, Washington, DC; the National Gallery of Canada, Ottawa; the Art Gallery of Ontario, Toronto; Museum Ludwig, Cologne; Centre Georges-Pompidou, Paris, and both the Montréal Museum of Fine Arts and the Musée d’Art Contemporain in Montréal. Michael Snow has represented Canada at the Venice Biennale and is a member of the Order of Canada and a Knight of the Order of Arts and Letters in France. Snow has recently exhibited Solo Snow at Le Fresnoy and a solo exhibition at The Vienna Secession, a sculpture retrospective at the Art Gallery of Ontario and a solo show at the Philadelphia Museum of Art. Michael Snow is represented by the Jack Shainman Gallery, New York.

With thanks to the Arts Council for essential annual funding and to the OPW, Department of Social Protection, Kilkenny Local Authorities and Molson Canadian for additional assistance.