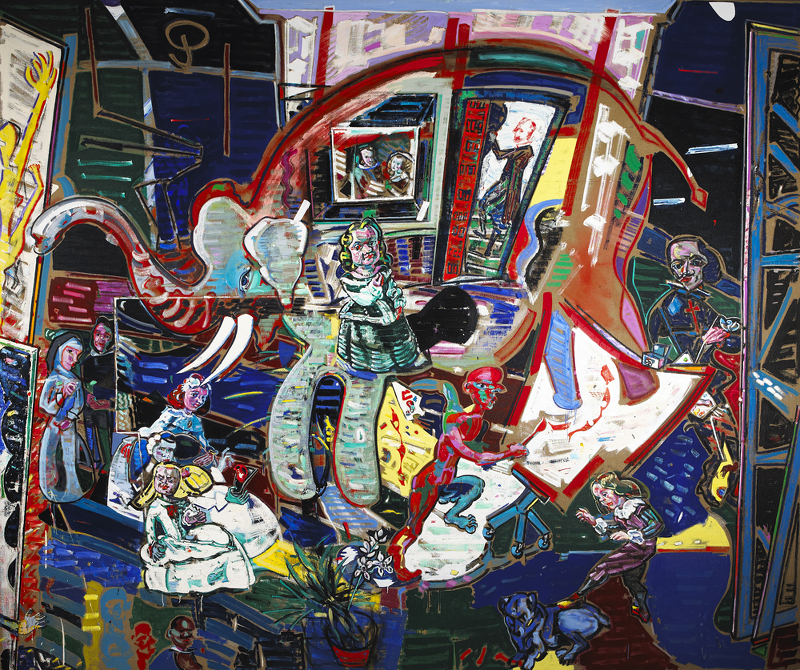 Back in the Summer of ‘88 I set out to paint a big painting, 350 x 400 cm in the music room of the Tyrone Gutherie Centre, at Annaghmakerrig. In the middle of stretching the canvas and musing about what I might paint on it, a pier mirror in the room caught my eye and all of a sudden something clicked. Mirrors! The mirror in this instance triggered off a memory of my earliest visit to the Prado in Madrid, way back in 1969, where for the first time I saw Velázquez’s Las Meninas in the flesh. It was hanging, entirely on its own, in a light greenish-grey beige-coloured room, and on the wall facing it was a large mirror in which you could see yourself in relation to the picture’s internal space, perspectively speaking. And so, with this reflection in mind I ended up making a study of Las Meninas, set into a composition, which also included the music room as studio.

Fast forward to November 2000. On the day my youngest daughter Emily was born I went into my studio after her birth and drew the outline in red paint of an elephant – along with the figure of a painter painting, going full throttle, which stands in for the Demiurge in the throes of making the world visible in paint. The action is taking place in my studio, on a canvas the same size as the aforementioned one above. Gordon Woods, a fellow artist from the north of Ireland, had gifted the stretcher for this canvas to me. I spent a long time stitching three enormous pieces of linen together by hand, so as to honour his gift. A couple of days later I was standing in the studio when from the painting racks above my head fell an old preparatory drawing, in watercolour, for the Annaghmakerrig Las Meninas study. This prompted me as to how I should celebrate Emily’s arrival in the world. She became, cast as the Infanta, the pivotal point of the painting.

Elephants carry a lot of baggage in terms of symbolism. They have been depicted in art since prehistoric times: worshiped as gods; credited with carrying the world on their backs; family values; wisdom and luck; prodigious memories, etcetera. An elephantine memory is a useful asset for the artist! My elephant came right out of my head. For me it seemed to represent fecundity, life force, along with endless other possibilities. And, as it turned out in the end, served as a means of unifying the flux of the painting – the red elephant in the studio!

There were long gestation periods while the painting was in progress. It gave rise to a body of work (roughly fifty paintings, in various media), which featured over a period of ten years, in a number of shows, solo and otherwise. These works fed off of or cannibalised the energy generated by the mother lode provided by the big painting and in turn flowed back into it, feeding and bringing it to full term. All in all, my engagement with this work spanned an entire decade, and thus has been a paraphrases of my daughter’s girlhood – the Annaghmakerrig study was completed in three weeks.

Michael Cullen RHA was born in County Wicklow in 1946. He studied painting at the National College of Art in Dublin and life drawing at the Central College of Art and Design in London. What distinguishes Cullen from many other painters of his generation is his belief that the task of painting has to remain open to the influences of one’s own environment: to give priority to one’s own immediate existential situation. Following the Danish philosopher Søren Kierkegaard he also believes that ‘the rationalist cannot dance’.

Since 1968 he has had numerous solo shows and has also been a frequent participant in group exhibitions and has lived and painted for long periods of time in England, Spain, Morocco, Germany, Mexico and France. For the past number of years he has been dividing his time between Spain and Ireland.

His works are in the following collections: The National Gallery of Ireland, Print Collection, the Irish Museum of Modern Art, the Ulster Museum, the Arts Council of Ireland, the Arts Council of Northern Ireland, the Irish Contemporary Art Society, the Berlin Senate, Dublin City Gallery The Hugh Lane, Bank of Ireland, AlliedIrish Bank, the Office of Public Works and Trinity College, Dublin. In 1984 he became an elected member of Aosdána. In 2006 he was elected as an Associate Member of the Royal Hibernian Academy and was elected to full membership in 2007.