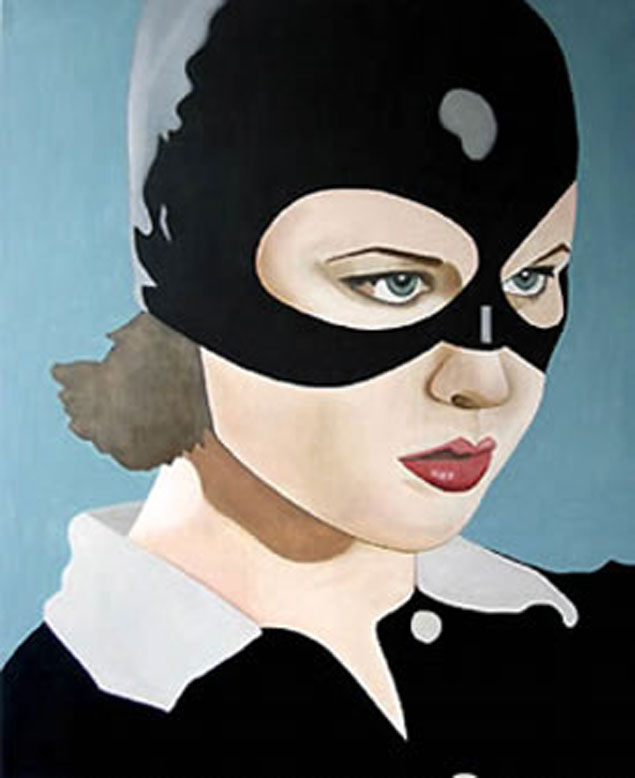 ‘Scientists believe dark matter particles will turn out to be proof of a theory called supersymmetry, which predicts that every kind of particle in the universe is paired with a heavier twin. Finding evidence for supersymmetry is one of the major goals of the Large Hadron Collider in Cern, in Switzerland’ (The Guardian, 18.12.09).

Doubles or Doppelgangers have a huge history in western culture, the double is traditionally seen as either a demon or the devil within and twins and look-alikes are continual sources of artistic fascination. The supersymmetry concept adds a whole new scientific layer suggesting we are locked together with our opposite for good or bad. Painters, Michael Bartlett and Cathy Lomax, have previously collaborated on The Image Duplicator series, which featured non-identical paintings of identical twins. Doubles takes their ideas in further different directions.

Following past collaborations including ‘The Image Duplicator’ at gASP Gallery, Portsmouth in 2008, and Contemporary Art Projects (CAP) in 2009, Michael Bartlett & Cathy Lomax team up again to present ‘Doubles’.

Cathy Lomax‘s work often takes popular culture and shared experiences as a starting point. Her recent work has focused on film, which can be seen as having a kind of supersymmetry of its own with its replication of the world through shadows on the screen. For Doubles she has looked at three versions of the same film, A Star is Born. Made in 1937, 1954 and 1976 respectively, each version changes details to suit the time it was made but the story is the intrinsically the same. Lomax has isolated and cropped the same moment (or place in the plot) from two of the three films and made diptyches. The work springs from ideas around repetition and duplication rather than the romantic doppelganger tradition.

Michael Bartlett‘s paintings relate to a series of images taken on a day of London gallery visits in December 2009. Positioning himself as the viewer he has manipulated his photographic source material to form double images. His resulting small oil on panel paintings have a particular reference to colour and form. Bartlett’s work comments on and observes contemporary culture. He has previously made paintings about people viewing and being viewed in galleries, identical and non-identical twins and a series of large-scale diptychs. Doubles is a continuation and expansion of these themes.