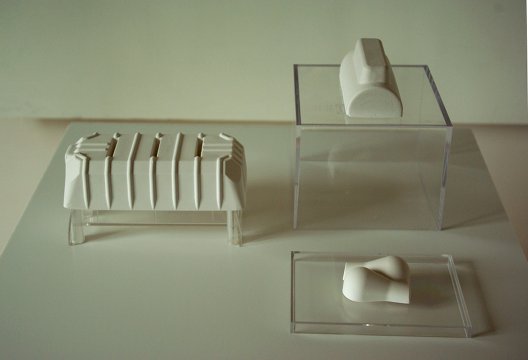 Walsh works with a series of ready-mades and discarded objects, as well as video and photography, in order to explore ideas pertaining to human interaction with space and more specifically the manner in which architecture affects the way we move and behave within it. Lens-based media becomes a tool for Walsh to form a meditation on the objects she creates, as well as opening a dialogue on the way in which museums present and display work resulting in what Walsh terms: the spectacularisation of museum culture with the resultant immateriality of the artworks.

Strangely Familiar Shades of Grey plays on Walsh’s imagined recreations of Eileen Grey’s houses Tempe a Pialle** and E1027. The artist builds on the myth and legend of these lost spaces. The work engages with the creativity of Grey’s furniture, a marvel of malleable functionality where every piece was inventively designed to move in some way.