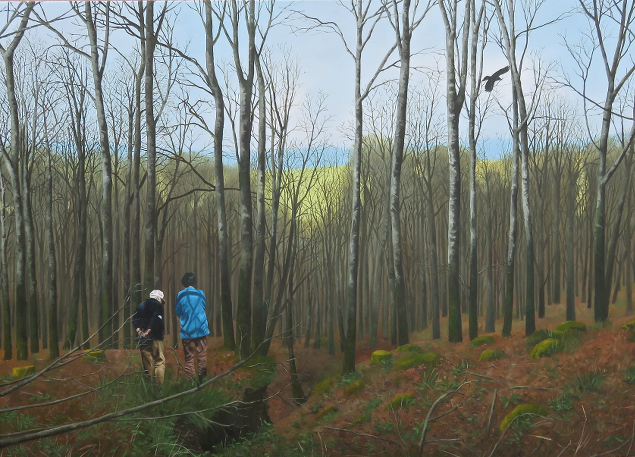 Taylor Galleries is proud to present Territory, an exhibition of new paintings by Martin Gale. Territory is Martin Gale’s 15th solo exhibition and opens exactly 40 years after his very first one-man exhibition at Bruce Arnold’s Neptune Gallery in Dublin in 1974.

Territory consists of a series of new paintings in oil and watercolour. Martin Gale’s work responds to the contemporary Irish landscape, offering an often dark commentary on rural Ireland in which ordinary – even familiar – landscapes become arresting and uneasy. The figures peopling Gale’s landscapes often seem absorbed in something unseen, prompting the viewer to continue the suspended narrative. His realist style is meticulously detailed in execution, with an edge often derived from the psychological tension that is implicit in much of his work.

Born in Worcester in 1949, Martin Gale moved to Ireland at a young age and studied painting and drawing at the National College of Art & Design, Dublin from 1968 to 1973. In 1982 Gale was elected a member of Aosdána and in 1996 was made a full member of the Royal Hibernian Academy. He is currently a Board member of the National Gallery. He represented Ireland at the Paris Biennale in 1980 and his paintings have been included in several major surveys of contemporary and 20th century Irish art. A large-scale retrospective of his work travelled from the Royal Hibernian Academy to the Ulster Museum in 2004-05. In 2013 Gale was awarded an Honorary Doctorate in Fine Art from NUI Maynooth and earlier this year he was the recipient of the RHA Award for a Senior Artist at the 184th Annual Exhibition. Gale’s work is held in numerous private collections in Ireland and abroad and represented in major public collections including The Arts Council / An Chomhairle Ealaíon, AIB, Bank of Ireland, OPW / State Art Collection, ESB, Irish Museum of Modern Art (IMMA), Chester Beatty Library, and Crawford Art Gallery, Cork. He lives and works in Co. Kildare.