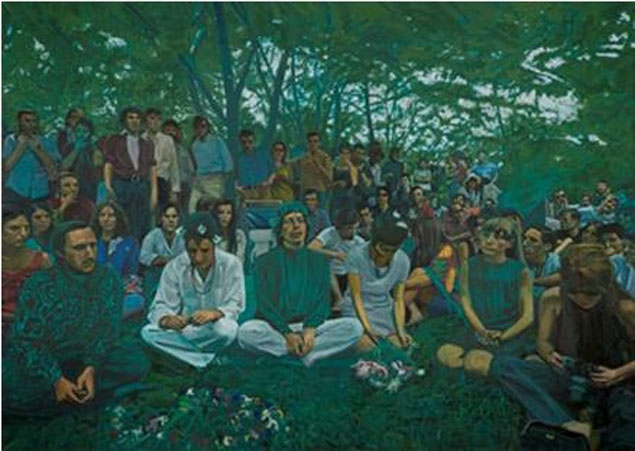 Temple Bar Gallery is pleased to announce Leaders and Followers a new body of work by the Irish artist Mark O’Kelly produced over the last six months and made specifically for this solo show. O’Kelly has completed five paintings on a grand scale for Temple Bar Gallery. Collectively, they may be described as expansive, vivid and highly representational depictions of entirely diverse subjects; their diversity however, belies the underlying consortium of referents and nodes of connectivity that ultimately allow the disparate to cohere into an authentic whole.

O’Kelly’s choice of material derives from his own personal bank of found imagery. This is a collection he has amassed over time but he has a particular fondness for the type of snapshot or image redolent of the sixties or seventies with its greenish, yellow hues indicative of the technology of its time and its limitations. When such images get ‘exploded out’, transformed by the painter’s palette and O’Kelly’s very specific vantage points, they become something other, animated by the artist’s energy and by the audiences’ wish to invest meaningful narratives around subjects which acquire their own particular relevance according to the space, time and context in which they are viewed.

His fascination is with photography and the potential of painting to render it otherwise. As O’Kelly himself remarks ‘If photography glances a view or an action then painting fixes it’. Photography presents worlds of de-constructed possibility because it frames things partially. It is the painter’s privilege, he maintains, ‘to re-construct and re-frame’ which he does with considerable skill and intuition and very much informed by his knowledge of process and the language and associations of the medium.

Painting the un-paintable is one of the challenges O’Kelly sets himself, as in how to catch the flames swirling around the tail-end of the abandoned plane. Sometimes he chooses a bird’s eye view with embellishments included to heighten the energy or to emphasise the notion of occasion or ritual. Whether we imagine we are viewing scenes that are banal (the supermarket), historic (the Italian election), epic (the Western prairie) unknown, or perhaps identifiable (the group portrait) is for us to decide. Regardless, O’Kelly’s paintings are impressive for the worlds they encompass, worlds that emanate from a fusion between what exists and what can be imagined. The space he offers is there for our intervention.

Mark O’Kelly has exhibited widely both in and outside Ireland. His last solo show Unconscious was at the Black Mariah in Cork in 2009. His last museum show In Fashion was exhibited at the Limerick City Gallery of Art in 2005. He is represented by the Kevin Kavanagh Gallery, Dublin.