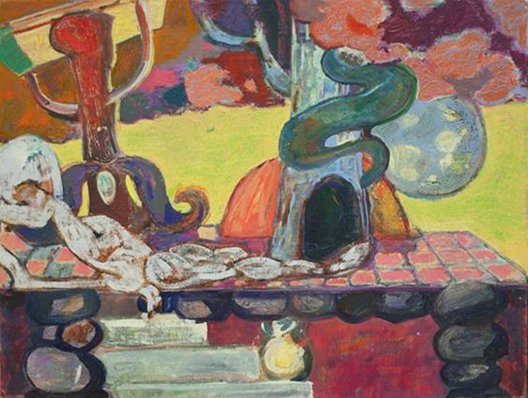 Mark McGreevy’s paintings are built in such a way that there is no clear approach to how they are constructed, drawings are made from several initial sources which are then developed through repeated addition and erasure, this continues until they have met a certain narrative that has previously been set out for them, this then is used as the primary material for his paintings.

McGreevy constructs the paintings within a similar framework until the initial image collapses leaving a surviving residue or armature of the image/idea, this making and semi destruction helps to create a fractured absurdist narrative that opens itself to randomness, fragmentary consciousness and dissociative disruptions, mimetic with the fragmentary process of building a painting through it’s parts.

The paintings presented in Bundle View are rooted in fact as much as in fiction, in the painting “Horrorscope” an approximation of a castle dwelling appears, taken from a real 17th century ruin that was grafted with centuries old Dry wall and relatively modern concrete onto the side of McGreevy’s local video store in the early 80’s.

“On and On and On” contains a Rhombohedron similar in form to “Durer’s Solid” but could easily reference the physical manifestation of Proteus IV a nihilistic self aware super computer in Donald Cammell’s “Demon Seed” 1977. “Aim, Toggle, Sleep” has the shallow dusty space of a terrace mantle piece laden with collected bric-a-brac, traces of an individual’s taste or needs in physical form.

All these works contain the threads of the experiential, low/high cultural references and ideas of the personal subjugating the collective and vice versa, hopefully creating a subsidence of authority through absurdity, casting doubt on the paintings value system and validating the chance to rethink and change one’s mind.

Mark McGreevy was born in 1975 in Northern Ireland. He studied Fine and Applied Arts at The University of Ulster, Belfast, where he also earned an MFA in 2003. He has exhibited in numerous National and Internationally curated exhibitions most recently in The Fold( A Painting Show), Visual, Carlow where he completed a new body of work for the main space gallery. He received an Arts Council bursary in 2009 and had a membership studio in TBG+S until 2010. Notable exhibitions, awards and residencies include: ‘Resolutions’ in The Katzen Arts Centre, Washington, DC 2007, ‘There, Not There’, Crawford, Cork in 2008. The AIB Award and The BOC Award, UK in 2004 when he was a short listed artist. During 2005 he was an artist on the ARP Programme in The Irish Museum of Modern Art. His work is represented in many collections, both private and public in Ireland and abroad including The University of Ulster and Arts Council of Northern Ireland.

Mark McGreevy is represented by the third space, Belfast.