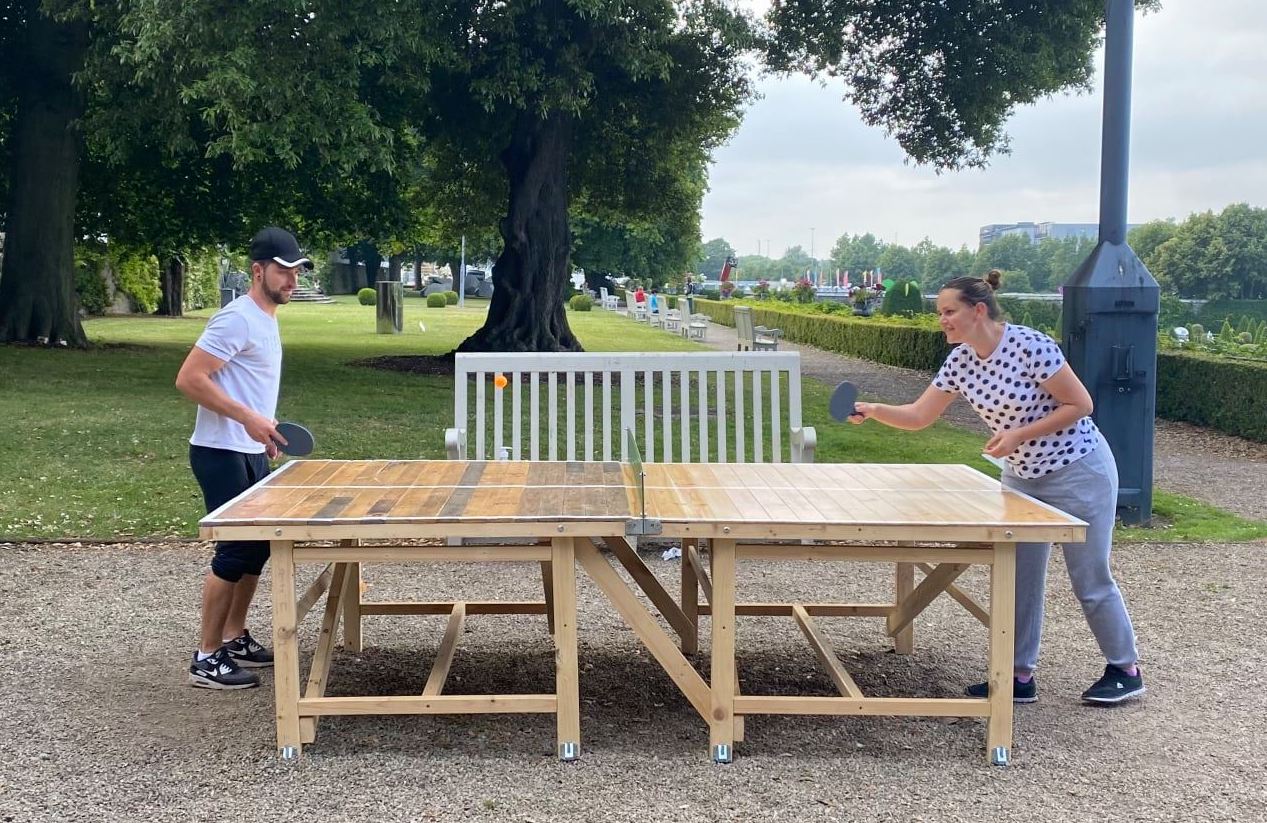 IMMA Outdoors presents Ping Pong Diplomacy by Mark Clare, a recreational installation which reignites the meaning of negotiation through the popular game of table tennis. The ping pong tables are built to official dimensions but they take a bit more than skill to use to their full potential, choose your side carefully. Join a friend and have some fun testing your skills.

We are delighted to recommission Ping Pong Diplomacy, a work originally made when the artist Mark Clare was on IMMA’s residency in 2007 – 2008.

Located on the Terrace of IMMA’s Formal Gardens, Ping Pong Diplomacy, 2021, consists of two table tennis tables constructed with a combination of re-cycled wood pallets and commercial flooring boards. The tables are built to official dimensions but they take a bit more than skill to use to their full potential. One half of the table has the appearance of a superior finish in contrast to a more worn characteristic of a re-cycled side. Both surfaces have their qualities and foibles that need to be negotiated and understood, add to these elements the individuals’ skills to affect a positive outcome in the game.

A visit to any Communist or ‘former’ Communist bloc country will be met with the familiar sight of table tennis tables placed outdoors in public arenas for recreational use by the local community, actions that at one time offered a new political hope.

The title of this project is taken from a political event in 1971 when America and China were engaged in a cold war and Nixon was looking for ways to make a breakthrough in political relations. Ping Pong became an activity for both countries to bond over.

“One of the first public hints of improved U.S. – China relations came on April 6th 1971, when the American Ping Pong team received a surprise invitation from their Chinese colleagues for an all-expense paid visit to the Peoples Republic. Probably never before in history has a sport been used so effectively as a tool of international diplomacy, with its premium on delicate skill and its onomatopoeic name implies interplay of both initiative and response.  Ping Pong was an apt metaphor for the relations between Washington and Peking.”   -  Time Magazine

IMMA welcomes you to negotiate your game of Ping Pong, choose your side to play on.